As we discussed yesterday on AMERICA First, President Trump made his first official state visit to the nation of India over the weekend. Upon arriving, he spoke to a roaring crowd of over 110,000 people, alongside India’s Prime Minister Narendra Modi.

President Trump spoke about the importance of sovereign nations putting their own interests first, while also reaffirming America’s commitment to an even stronger alliance with the world’s largest democracy. India, after all, is a natural ally for the United States due to both nations’ shared histories of seeking independence from the British Empire, both in pursuit of a more democratic form of government.

But at the same time, President Trump is proving his geo-strategic genius by pushing for a stronger alliance with India, for one very good reason: Offsetting China’s influence in the region. India, like China, is a major manufacturing nation and one of the top two most populous nations in the world. But unlike China, which is still a Communist dictatorship, India is a free society, the largest democracy in the world. As such, they are the only other major manufacturing nation that could balance out China’s disproportionate economic role.

Just as Richard Nixon opened relations with China to undermine the Soviet Union, Donald Trump is making a similar play with India to undermine China, and in this case helping democracy and not an evil dictatorship. Only time will tell as to whether or not this plan will succeed, but it is a very promising strategy, one that will be beneficial to both nations, and all our citizens. 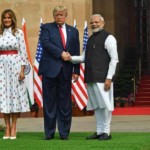