On Sunday, President Trump spoke more bluntly than he ever had before, and for good reason. He finally, and rightfully, called into question the patriotism and the loyalty of several members of Congress, who have used their time in office to espouse racist, anti-Semitic, and anti-American language.

The so-called “Squad” – Alexandria Ocasio-Cortez, Ilhan Omar, Rashida Tlaib, and Ayanna Pressley – are all avowed socialists and have repeatedly decried America as a “racist” country. They unapologetically push socialist policies such as universal healthcare and open borders, pretending that these ideas will somehow make America a “better” place.

Of these, Ilhan Omar might be the worst. Even though she came from an impoverished nation and found true liberty in America, she has continued to prove her ungratefulness, on top of regularly espousing racist bile. As such, President Trump made a legitimate suggestion that if Omar truly despises America so much, perhaps she’d be better served going back to her country of origin to try to fix their government and their way of life, rather than pointlessly complain about America’s “problems.”

Naturally, the FakeNews Industrial Complex has taken these comments out of context, lambasting the President as a racist. But these comments are not racist; they’re true. When such people are elected to office only to spew anti-Semitic and anti-white rhetoric, cheering on groups that tear down an American flag to replace it with a Mexican flag, and openly call for the elimination of our national sovereignty through open borders, it is clear that they do not love America and have no intention of actually improving our nation.

Rightfully so, President Trump has not backed down from these comments. He is doubling down, because the truth – and the majority of American citizens – are on his side.

Breitbart: President Trump Calls on #TheSquad to Apologize for ‘Foul Language They Have Used’

President Trump renewed the battle between himself and “radical left congresswomen” (otherwise known as The Squad), who he says speak badly about the U.S. and spew “racist hatred.” He called on them to apologize for the “foul language” and “terrible things they have said” in a pair of tweets Monday morning.

“When will the Radical Left Congresswomen apologize to our Country, the people of Israel and even to the Office of the President, for the foul language they have used, and the terrible things they have said. So many people are angry at them & their horrible & disgusting actions!”

He followed up in a second tweet, turning the tables on Democrats and calling them out for spewing “racist hatred.” He warned against the Democrat Party rallying behind the “unrepresentative Congresswomen” but said it will be “interesting” to see how it plays out if it continues to do so.

Trump sparked a political firestorm over the weekend after suggesting that ultra-leftist members of Congress “go back and help fix the totally broken and crime infested places from which they came.”

“So interesting to see “Progressive” Democrat Congresswomen, who originally came from countries whose governments are a complete and total catastrophe, the worst, most corrupt and inept anywhere in the world (if they even have a functioning government at all), now loudly and viciously telling the people of the United States, the greatest and most powerful Nation on earth, how our government is to be run. Why don’t they go back and help fix the totally broken and crime infested places from which they came. Then come back and show us how it is done. These places need your help badly, you can’t leave fast enough. I’m sure that Nancy Pelosi would be very happy to quickly work out free travel arrangements!”

Trump’s reference to House Speaker Nancy Pelosi (D-CA) all but confirmed that he was referring to members of the Squad – Reps. Alexandria Ocasio-Cortez (D-NY), Ilhan Omar (D-MN), Rashida Tlaib (D-MI), and Ayanna Pressley (D-MA) – all of whom have been in the midst of a power struggle against Pelosi, who has been defending moderates within their caucus.

The backlash was swift, with nearly every Democrat 2020 candidate accusing Trump of “racism.”

“This is racist. These congresswomen are every bit as American as you — and represent our values better than you ever will,” Beto O’Rourke (D) tweeted.

“When I call the president a racist, this is what I’m talking about,” Sen. Bernie Sanders (I-VT) wrote. “We must stand together for justice and dignity towards all.”

“Let’s be clear about what this vile comment is: A racist and xenophobic attack on Democratic congresswomen,” Sen. Elizabeth Warren (D-MA) added. “This *is* their country, regardless of whether or not Trump realizes it. They should be treated with respect. As president, I’ll make sure of it,” she promised.

Trump responded to the backlash – most specifically, the accusations of “racism” – in a pair of tweets Sunday evening, slamming Democrats across the board for defending people who “speak so badly of our Country.”

“So sad to see the Democrats sticking up for people who speak so badly of our Country and who, in addition, hate Israel with a true and unbridled passion. Whenever confronted, they call their adversaries, including Nancy Pelosi, “RACIST.” Their disgusting language and the many terrible things they say about the United States must not be allowed to go unchallenged. If the Democrat Party wants to continue to condone such disgraceful behavior, then we look even more forward to seeing you at the ballot box in 2020!”

The bitter battle is far from over, with Squad leader Ocasio-Cortez accusing the president of using the language of “white supremacists.”

“Until Republican officials denounce yesterday’s explicitly racist statements (which should be easy!), we sadly have no choice but to assume they condone it,” she tweeted Monday.

“We all know that AOC and this crowd are a bunch of communists,” Graham said on Fox News. “They hate Israel, they hate our own country.” 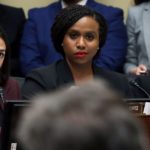