In the midst of the impeachment madness, it is easy to lose track of other real news that has broken over the last few months. But the historic significance of President Trump’s latest executive order cannot be ignored.

With the President’s signing of an executive order aimed at combating anti-Semitism in America, he has made several things clear. First, he has reaffirmed his support for the Jewish community, building off his prior policy initiatives with regards to Israel.

Secondly, his order takes direct aim at those dreaded bastions of the far-left in America today: Universities. Aimed at combating anti-Semitism at an institutional level, the order specifically addresses the rise of the Boycott, Divest, and Sanction (BDS) movement on college campuses across America. By signing this order, President Trump is prohibiting colleges and universities from using their institutional power to support this anti-Semitic campaign.

Lastly, he has again demolished the Left’s “racist” narrative against him; for all that the Left keeps accusing President Trump and his supporters of being white supremacists, bigots and Anti-Semites, President Trump is doing more to combat anti-Semitism than the Left ever did. If anything, he is only further exposing that the only real anti-Semites left in America are on the Left, not the Right. 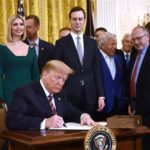