2020 started off with one of the starkest reminders of why President Trump is a true leader: He consistently succeeds where Barack Obama failed.

Few failures are a greater stain on the entirety of the Obama presidency than the jihadi attack on the U.S. embassy in Benghazi in 2012. Not only was it proof that radical Islamic terror had not subsided, but that it flourished under Obama’s non-leadership, but it also demonstrated that Obama was unwilling to even do what was necessary to defend American lives abroad.

By contrast, President Trump rang in the new year by doing everything that needed to be done when a similar situation unfolded at the U.S. embassy in Baghdad on December 31st. When thousands of radical Iran-backed Islamic militia members descended upon the embassy and attempted to breach it, President Trump sent in 100 Marines to secure the compound and protect the Americans inside, eventually driving away the attackers.

Unlike Barack Obama and then-Secretary of State Hillary Clinton, who left the American ambassador and others to die without backup in Benghazi, President Trump wasted no time in fulfilling his most important duty as Commander-in-Chief: Protecting American lives. He has since issued a stern threat to Iran for their part in the attack, and has made it beyond clear that the United States will respond with force, if necessary.

That is why President Trump is not only a great president in his own right, but an incomparable improvement in every way over his predecessor: He is a real leader and knows what must be done as a leader and he believes above all else in America – and Americans – First. 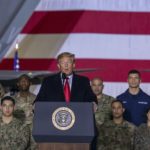