From the Kavanaugh smears, to the fake “whistleblower” story, the FakeNews Industrial Complex has been jumping from one lie to another at a head-dizzying pace. Their newest line of attack is to make a scandal out of a nothingburger regarding Rudy Giuliani’s comments on Joe Biden and Ukraine, while completely ignoring the true scandal of Biden’s corrupt business dealings, cronyism, and abuse of power.

But if this plays out how we think it will play out, then President Trump has once again masterfully manipulated the media cycle. Now they have no choice but to acknowledge Biden’s Ukrainian troubles and other examples of his corrupt involvement in foreign affairs, making it an issue that he will not be able to run away from in 2020.

Two years after leaving office, Joe Biden couldn’t resist the temptation last year to brag to an audience of foreign policy specialists about the time as vice president that he strong-armed Ukraine into firing its top prosecutor.

In his own words, with video cameras rolling, Biden described how he threatened Ukrainian President Petro Poroshenko in March 2016 that the Obama administration would pull $1 billion in U.S. loan guarantees, sending the former Soviet republic toward insolvency, if it didn’t immediately fire Prosecutor General Viktor Shokin.

“Well, son of a bitch, he got fired. And they put in place someone who was solid at the time,” Biden told the Council on Foreign Relations event, insisting that President Obama was in on the threat.

Interviews with a half-dozen senior Ukrainian officials confirm Biden’s account, though they claim the pressure was applied over several months in late 2015 and early 2016, not just six hours of one dramatic day. Whatever the case, Poroshenko and Ukraine’s parliament obliged by ending Shokin’s tenure as prosecutor. Shokin was facing steep criticism in Ukraine, and among some U.S. officials, for not bringing enough corruption prosecutions when he was fired.

But Ukrainian officials tell me there was one crucial piece of information that Biden must have known but didn’t mention to his audience: The prosecutor he got fired was leading a wide-ranging corruption probe into the natural gas firm Burisma Holdings that employed Biden’s younger son, Hunter, as a board member.

U.S. banking records show Hunter Biden’s American-based firm, Rosemont Seneca Partners LLC, received regular transfers into one of its accounts — usually more than $166,000 a month — from Burisma from spring 2014 through fall 2015, during a period when Vice President Biden was the main U.S. official dealing with Ukraine and its tense relations with Russia.

Shokin told me in written answers to questions that, before he was fired as general prosecutor, he had made “specific plans” for the investigation that “included interrogations and other crime-investigation procedures into all members of the executive board, including Hunter Biden.”

He added: “I would like to emphasize the fact that presumption of innocence is a principle in Ukraine” and that he couldn’t describe the evidence further.

William Russo, a spokesman for Joe Biden, and Hunter Biden did not respond to email messages Monday seeking comment. The phone number at Rosemont Seneca Partners LLC in Washington was no longer in service on Monday.

The timing of Hunter Biden’s and Archer’s appointment to Burisma’s board has been highlighted in the past, by The New York Times in December 2015 and in a 2016 book by conservative author Peter Schweizer.

Although Biden made no mention of his son in his 2018 speech, U.S. and Ukrainian authorities both told me Biden and his office clearly had to know about the general prosecutor’s probe of Burisma and his son’s role. They noted that:

Hunter Biden’s appointment to the board was widely reported in American media;

The U.S. Embassy in Kiev that coordinated Biden’s work in the country repeatedly and publicly discussed the general prosecutor’s case against Burisma;

Great Britain took very public action against Burisma while Joe Biden was working with that government on Ukraine issues;

Biden’s office was quoted, on the record, acknowledging Hunter Biden’s role in Burisma in a New York Times article about the general prosecutor’s Burisma case that appeared four months before Biden forced the firing of Shokin. The vice president’s office suggested in that article that Hunter Biden was a lawyer free to pursue his own private business deals.

But the Ukrainian investigation and Joe Biden’s effort to fire the prosecutor overseeing it has escaped without much public debate.
Most of the general prosecutor’s investigative work on Burisma focused on three separate cases, and most stopped abruptly once Shokin was fired. The most prominent of the Burisma cases was transferred to a different Ukrainian agency, closely aligned with the U.S. Embassy in Kiev, known as the National Anti-Corruption Bureau of Ukraine (NABU), according to the case file and current General Prosecutor Yuriy Lutsenko.

NABU closed that case, and a second case involving alleged improper money transfers in London was dropped when Ukrainian officials failed to file the necessary documents by the required deadline. The general prosecutor’s office successfully secured a multimillion-dollar judgment in a tax evasion case, Lutsenko said. He did not say who was the actual defendant in that case.

As a result, the Biden family appeared to have escaped the potential for an embarrassing inquiry overseas in the final days of the Obama administration and during an election in which Democrat Hillary Clinton was running for president in 2016.

But then, as Biden’s 2020 campaign ramped up over the past year, Lutsenko — the Ukrainian prosecutor that Biden once hailed as a “solid” replacement for Shokin — began looking into what happened with the Burisma case that had been shut down.

Lutsenko told me that, while reviewing the Burisma investigative files, he discovered “members of the Board obtained funds as well as another U.S.-based legal entity, Rosemont Seneca Partners LLC, for consulting services.”

Lutsenko said some of the evidence he knows about in the Burisma case may interest U.S. authorities and he’d like to present that information to new U.S. Attorney General William Barr, particularly the vice president’s intervention.

“Unfortunately, Mr. Biden had correlated and connected this aid with some of the HR (personnel) issues and changes in the prosecutor’s office,” Lutsenko said.

Nazar Kholodnytskyi, the lead anti-corruption prosecutor in Lutsenko’s office, confirmed to me in an interview that part of the Burisma investigation was reopened in 2018, after Joe Biden made his remarks. “We were able to start this case again,” Kholodnytskyi said.

But he said the separate Ukrainian police agency that investigates corruption has dragged its feet in gathering evidence. “We don’t see any result from this case one year after the reopening because of some external influence,” he said, declining to be more specific.

Ukraine is in the middle of a hard-fought presidential election, is a frequent target of intelligence operations by neighboring Russia and suffers from rampant political corruption nationwide. Thus, many Americans might take the restart of the Burisma case with a grain of salt, and rightfully so.

But what makes Lutsenko’s account compelling is that federal authorities in America, in an entirely different case, uncovered financial records showing just how much Hunter Biden’s and Archer’s company received from Burisma while Joe Biden acted as Obama’s point man on Ukraine.

Between April 2014 and October 2015, more than $3 million was paid out of Burisma accounts to an account linked to Biden’s and Archer’s Rosemont Seneca firm, according to the financial records placed in a federal court file in Manhattan in an unrelated case against Archer.

The bank records show that, on most months when Burisma money flowed, two wire transfers of $83,333.33 each were sent to the Rosemont Seneca–connected account on the same day. The same Rosemont Seneca–linked account typically then would pay Hunter Biden one or more payments ranging from $5,000 to $25,000 each. Prosecutors reviewed internal company documents and wanted to interview Hunter Biden and Archer about why they had received such payments, according to interviews.

Lutsenko said Ukrainian company board members legally can pay themselves for work they do if it benefits the company’s bottom line, but prosecutors never got to determine the merits of the payments to Rosemont because of the way the investigation was shut down.

As for Joe Biden’s intervention in getting Lutsenko’s predecessor fired in the midst of the Burisma investigation, Lutsenko suggested that was a matter to discuss with Attorney General Barr: “Of course, I would be happy to have a conversation with him about this issue.”

As the now-completed Russia collusion investigation showed us, every American deserves the right to be presumed innocent until evidence is made public or a conviction is secured, especially when some matters of a case involve foreigners. The same presumption should be afforded to Joe Biden, Hunter Biden, Devon Archer and Burisma in the Ukraine case.

Nonetheless, some hard questions should be answered by Biden as he prepares, potentially, to run for president in 2020: Was it appropriate for your son and his firm to cash in on Ukraine while you served as point man for Ukraine policy? What work was performed for the money Hunter Biden’s firm received? Did you know about the Burisma probe? And when it was publicly announced that your son worked for Burisma, should you have recused yourself from leveraging a U.S. policy to pressure the prosecutor who very publicly pursued Burisma? 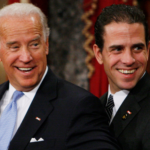 Our Take: President Trump Turns the Focus to Biden’s Corruption