As President Trump unapologetically doubles down on his accurate criticisms of four radical Democrats in the House of Representatives, the Four Horsewomen of the Apocalypse, he is further proving what a masterful strategist he is on the battlefield of social media.

As the President himself acknowledged at the historic Social Media Summit, social media – especially Twitter – played a significant role in his victory in 2016. As President, his Twitter account allows him to jump over the FakeNews Industrial Complex monopoly of information.

This latest social media war of words just may be the most important one yet. As the media spent weeks covering a vicious civil war within the Democratic Party – House Speaker Nancy Pelosi vs. Alexandria Ocasio-Cortez and her “squad” of radical Socialists – President Trump has effortlessly flipped the script and successfully lumped all House Democrats into one radical camp. And that is because they willingly did so in response to his Tweets. Now, the same Nancy Pelosi and Alexandria Ocasio-Cortez who were fighting each other just a week ago are united, but for the purpose of defending blatantly anti-American and extremist far-Left rhetoric.

Why would President Trump voluntarily interrupt such an intra-party feud, for the explicit purpose of uniting the Democrats? Simple: He has fooled them into standing behind a group of Congresswomen who, as internal Democratic polls reveal, are wildly unpopular across the country. AOC, who is recognized by 74% of voters, has just a 22% approval rating; Omar, with a 53% recognition rate, has just a 9% approval rating.

President Trump knows how this will work in his favor in 2020. That’s why he’s not taking any chances, not backing down, and is tripling down. Because this is a winning strategy.

“The poll — taken in May, before Speaker Pelosi’s latest run-in with AOC and the three other liberal House freshmen known as “The Squad” — included 1,003 likely general-election voters who are white and have two years or less of college education….

Ocasio-Cortez was recognized by 74% of voters in the poll; 22% had a favorable view.

Rep. Ilhan Omar of Minnesota — another member of The Squad — was recognized by 53% of the voters; 9% (not a typo) had a favorable view

The Axios report claims Democrats are “sounding the alarm” that swing voters do not like socialism and are warning these sentiments could hinder their chances at a 2020 presidential win and maintaining their majority in the House of Representatives.

One “top Democrat” told Axios, “If all voters hear about is AOC, it could put the [House] majority at risk. [S]he’s getting all the news and defining everyone else’s races.”

The Democrat also warned that socialism was “toxic to these voters.” 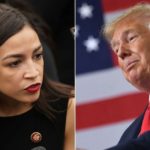