As the Democrats threatened to “ramp up” their impeachment efforts with more congressional subpoenas in the coming days, President Trump has decided to jump out ahead of them and take this entire fiasco head-on: He is reportedly going to send an official letter to Nancy Pelosi refusing to comply with any such subpoenas unless and until the House takes a formal vote on impeachment.

Just like the preparations for the first-ever summit with North Korea, President Trump has shown how you get ahead of an escalating situation and take control yourself, in a move that most did not expect but now puts the ball firmly back in the Democrats’ court. Now he truly has Pelosi and her goons backed into a corner, with no way out of this situation unscathed; and that is a good thing for America, and for the rule of law.

The Trump Administration will be sending House Speaker Nancy Pelosi (D-Calif.) a formal letter daring the Democrats to hold a full, official impeachment vote in the House, The Hill reports.

According to the report, the letter will state that the Trump White House will not cooperate with any subpoenas and other such requests from House Democrats unless and until a formal vote is taken on the floor of the House.

This came after Pelosi announced the beginning of an “impeachment inquiry,” without expanding on what this really meant or what the “inquiry” would entail. Some have since described this move as a sort of middle ground between actual impeachment and holding off on impeachment, in an attempt to satisfy both the moderates and the radicals in the party.

As The Hill notes, the move may not only be designed to put moderate, swing-district Democrats on the spot going into the 2020 elections, but also insures that “GOP lawmakers can have a greater say in impeachment hearings…once the full chamber formally approves it.”

House Democrats only narrowly surpassed the threshold of majority support for an impeachment inquiry last week, but it is still unclear if the caucus has enough votes in favor of actual impeachment. 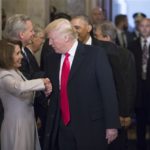 Our Take: President Trump Takes Control of the Impeachment Narrative