With the White House’s letter to Speaker Nancy Pelosi, President Trump has thrown down the gauntlet once again, and has proven he is not backing down and not giving in.

The Democrats are trying to overthrow a duly-elected president solely because they cannot handle defeat. They are deliberately twisting around the rules of a proper impeachment in order to appease their far-left base, without actually having to go through the process as outlined by the Constitution. Donald Trump is saying “enough,” and has declared that he will not cooperate unless the Democrats agree to do it by the books. This is how you fight, and this is how you win.

What else should President Trump do to resist the Democrats’ blatant obstructionism? Call in to AMERICA First and give us your suggestions, at 833-334-6752.

The White House on Tuesday sent a letter to House Speaker Nancy Pelosi denouncing the impeachment inquiry begun in the House of Representatives as “illegitimate.”

“President Trump and his administration reject your baseless, unconstitutional efforts to overturn the democratic process,” the letter read.

The eight-page letter was released by the White House to reporters on Tuesday evening.

“Your unprecedented actions have left the president with no choice. In order to fulfill his duties to the American people, the Constitution, the Executive Branch, and all future occupants of the Office of the Presidency, President Trump and his administration cannot participate in your partisan and unconstitutional inquiry under these circumstances.”

The White House refused to comply with Democrat demands for witnesses and documents, citing the “legal and constitutional flaws” in the process.
Speaking to reporters after the letter was released, the White House sternly lectured the House Democrats for breaking precedent by hosting an impeachment process without holding an official vote.

“For the first time in our nation’s history, the House of Representatives is now purporting to proceed an impeachment inquiry against the president, without conducting a vote on the house floor,” a senior White House official said in a call with reporters after the letter was released.

The official did not detail whether the president was willing to cooperate with the House of Representatives’ inquiry if the vote passed.

“We don’t want to speculate on what would happen in various hypothetical situations,” the official said.

“All of this violates the Constitution, the rule of law, and every past precedent,” the letter read. “Never before in our history has the House of Representatives-under the control of either political party-taken the American people down the dangerous path you seem determined to pursue.”
The letter argued that Democrats were using impeachment hearings to reverse the 2016 election and to influence the 2020 election.

“The Founders, however, did not create the extraordinary mechanism of impeachment so it could be used by a political party that feared for its prospects against the sitting President in the next election,” it read.

Our Take: As the Women’s March Falls, the March for Life Rises

Our Take: Abortion is a Modern Holocaust 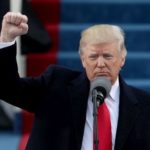 Our Take: President Trump Shows How to Fight Back