President Trump’s highly-anticipated appearance at the Daytona 500 was a massive success for several reasons, not the least of which being that it served as yet another perfect example of why Americans love him so much in the first place.

First, he showed that he is willing to go to events that define real America outside the Swamp. Rather than simply attend high-class dinners, political conferences, or meetings of special interest groups, President Trump still makes the time to attend events that regular Americans care about, events that are a staple of American culture.

At the same time, his speech before giving the iconic “start your engines” command proves that he has not forgotten the most basic principles of what it means to be an American: At the end of the day, regardless of our occupation or various political beliefs, all true Americans believe in the core values of God, family, and country. Such a declaration, and such a setting for making such a statement, are totally alien concepts to the political elite that have been running our country for the last several decades.

At the end of the day, President Trump is still a man of the people, as he always has been. That has certainly not changed since he became President, and if anything, he relates even more closely to the American people now than he did before. That is exactly why 63 million Americans voted for him to become President of the United States. 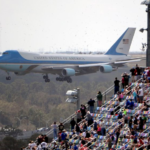 Our Take: President Trump Proves why America Loves Him