As the impeachment vote in the House is upon us, President Trump has demonstrated that he is not going to hold back any longer when it comes to his true thoughts and intentions regarded the unprecedented witch hunt.

As his forceful letter to Nancy Pelosi yesterday confirms, he is going to speak his mind on the matter and openly denounce this total sham of an impeachment process for what it is: a violation of the Constitution, and a blatantly partisan hit-job that has nothing to do with following the law or respecting our Constitution.

In so doing, President Trump is not only saying what’s on his mind, as he usually does, but he is also speaking what is on the minds of so many regular Americans who are sick and tired of the entire ordeal. After three months, nothing has been proven and it is all too obvious that President Trump will not be removed from office.

President Trump knows that this is a waste of time, as do the 63 million Americans who elected him. At this point, while the battle over his legacy is one thing, the battle over the future of impeachment is far greater and could have serious repercussions for the future of our Constitution if this process is mishandled as horribly as it has been, and that will cause far greater damage than even Pelosi can imagine. 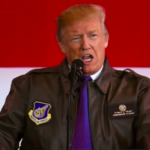 Our Take: President Trump No Longer Holds Back on Impeachment