As President Trump represents America at the NATO summit in London, we must reflect on the incredible progress that has been made in American diplomacy, foreign policy, and national security in just three years.

Despite having never held elected office before, President Trump has applied The Art of the Deal to the international stage, with incredible success. From peaceful negotiations with North Korea to masterful handlings of Syria and Afghanistan, and from the destruction of the ISIS Caliphate to strengthening alliances from NATO to South Korea, the Trump Doctrine has proven a resounding success.

And he has done all of this despite the opposition of the bureaucratic class that has dictated our disastrous foreign policy for decades, and the media that will run cover for these elites at every turn. It is true that his approach has completely defied conventional wisdom when it comes to foreign policy and diplomacy. And perhaps that’s exactly why it was worked so well. 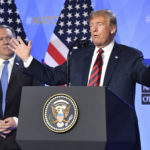 Our Take: President Trump: Making the World a Safer Place