Nearly every other day, President Trump is proving himself to not only be a successful president in his own right, but also to be a vastly superior leader for this country than any of the Democrats could ever dream of being.

It has been said that last week was perhaps one of the best weeks for the Trump Administration, and simultaneously one of the worst weeks ever for the Democratic Party. President Trump thoroughly defeated the Democrats in the impeachment battle, with his magnificent State of the Union given the day before his “forever acquittal.”.

At the same time, the Democrats are struggling to even get a nominee to run against him in November. We still don’t know who won in the Iowa caucuses and the Democratic field remains as divided as ever going into the New Hampshire primary. And just last night, the President held a massive rally in New Hampshire that dwarfed the rallies of any of his Democratic rivals.

No matter where or how the Democrats fight him, from the halls of Congress to the campaign trail, the Democrats will always find themselves miles behind President Trump, and there is little they can do to change that given who he is. But those who believe in the MAGA Agenda can take nothing for granted. We have 265 days until the election, and that is a lifetime in politics. 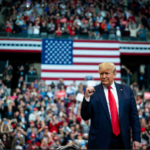 Our Take: President Trump Leaves Democrats in the Dust