The Democrats have long since forgotten the people they claim to represent. With constant anti-American rhetoric and demands for dangerous Socialist policies, the Democrats have an utter disdain for the American people and our heritage.

But their contempt is perhaps strongest for the working class, the backbone of the Republic. It’s well-known that President Trump ultimately secured victory by winning the working class in the Rust Belt, a bloc that had traditionally voted for Democrats in the last three decades. As President, he has fought harder than ever for the rights and prosperity of the working class, from his deregulation efforts to his tough trade actions against China and other foreign manufacturers, plus his energy policies.

The President made it abundantly clear in his recent rally in New Hampshire: America thrives on the backs of the working class, who represent some of the best this country has to offer. Through all of the hysteria from the FakeNews Industrial Complex, and the baseless cries of “racism” from the Democrat Struggle Bus, the forgotten men and women know exactly who is fighting for them in Washington today.

A majority of Pennsylvania’s working class voters want to see President Donald Trump reelected in 2020, according to new poll out of the state.

A poll released by Franklin & Marshall College on Thursday indicates that 51 percent of Pennsylvania voters with a high school degree or less believe Trump deserves a second term. Conducted between July 29 and August 4 by surveying 627 registered voters, the poll is good news for the president’s reelection chances.

Pennsylvania, like other parts of the industrial United States, was once considered solidly in the Democrat camp until 2016, when then-candidate Donald Trump became the first Republican to carry the state since 1988. The victory was made possible by the large scale defection of working-class voters, who historically supported Democrats but were drawn to Trump’s movement by his strong stance on globalization and immigration.

Trump, himself, elaborated on the coalition he was building during an interview with Bloomberg Businessweek in May 2016.

Trump said at the time:

“Five, 10 years from now—different party. You’re going to have a worker’s party. A party of people that haven’t had a real wage increase in 18 years, that are angry… I think cutting Social Security is a big mistake for the Republican Party. And I know it’s a big part of the budget. Cutting it the wrong way is a big mistake, and even cutting it [at all].”

The message and rhetoric seemed to work. Exit polling from the 2016 race showed voters without a college degree backed Trump over former secretary of state Hillary Clinton by a margin of 52 percent to 44 percent. The share was significantly greater among non-college educated whites who broke for Trump by the largest margin since 1980—67 percent to 28 percent.

Such voters not only helped fuel Trump’s victory in Pennsylvania, but also in Michigan, Wisconsin, and Iowa — states that secured a win in the electoral college, despite a three million popular vote deficit. 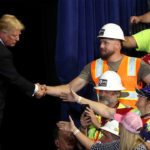 Our Take: President Trump is the Champion of the Working Class