Yesterday was perhaps one of the most important days of Donald J. Trump’s presidency. Not only did he take further action on the citizenship issue with a sweeping executive order on the Census, but he hosted a grand Social Media Summit featuring some of the most influential content creators on the Internet.

From James O’Keefe of Project Veritas, to Charlie Kirk of Turning Point USA, to the master meme-maker Carpe Donktum, and your own host of AMERICA First, the event highlighted the important role that social media plays in our lives, and especially in our political discourse.

Naturally, the FakeNews Industrial Complex was not happy about the event’s taking place. Their petulance was further stoked by the seating arrangements in the Rose Garden for the President’s speech on the Census after the summit: Whilst most of the mainstream media were kept to a standing-only area behind a rope line and the summit’s guests and other citizen journalists were given seats in the Garden itself. It was this seating arrangement that triggered a demented outburst from one Press Corps member claiming to be a “journalist,” who vented his anger at the summit’s attendees and accused them of being “eager for demonic possession.” Whatever that means. It was then that your host, Sebastian Gorka, decided to call the “reporter” out for what he truly is: A punk.

But while the event itself was the highlight of the day, even the smallest details can carry a larger meaning. In a way, even something as mundane as the seating arrangement signifies the larger attitude and approach that President Trump has taken with his presidency: In Trump’s America, the citizens matter. The citizen journalists, the independent content creators, and other representatives of alternative media are the true purveyors of real news in America today, not the fake “journalists” who really have become the Enemy of the People.

I don’t read Playboy, not even for the articles, but we all learned about the magazine’s “Political Analyst” when Brian Karem hollered insults at President Trump and his supporters in the White House Rose Garden yesterday.

Karem, according to his biographies, has bounced around a number of news outlets in the past few years, landing mostly recently at Playboy Magazine and (of course) CNN.

Karem’s disdain for the Trump Administration, his former staffer, and his supporters was on ghastly display yesterday as he accused White House Social Media Summit attendees of favoring “demonic possession”. He then asked former White House staffer Dr. Sebastian Gorka to “go outside and have a long conversation” with him. He winked while saying it.

Karem is, as we say in Britain, gobby.

He’s used to talking over people. Shouting over them, in fact. As he did with Sarah Huckabee Sanders in the press briefing room last year.

He also did it to independent journalist and filmmaker Mike Cernovich.

Brian clearly likes attention. He’s also got some opinions, and wants everyone to know what they are, no matter how ill-informed.

But his behavior in the White House yesterday was baffling. This White House should do more to demonstrate to the world how swivel-eyed many of these “journalists” are.

Ali Vitali at MSNBC displayed the same predilection in South Korea following a shooting at the Sutherland Springs church in Texas. Certainly CNN viewers must notice it with Brooke Baldwin every day, as she shakes her head and kisses her teeth to express her latest Trump Derangement Syndrome-induced outrage.

It’s the widening of the eyes, the clenching of the teeth, the inability to control themselves that marks these “journalists” apart from many of their more staid colleagues.

Trump and his supporters have broken these people, and like Kathy Griffin, they don’t care if the world sees it.

Reporters would have never, ever thought to hurl insults like “eager for demonic possession” at Obama invitees to the White House. They’d have never screamed about empathy in the face of the former president’s press secretary, Josh Earnest. Despite the Obama administration’s record on child separation, human trafficking, mass bombings, and drone strike killings.

“We never had to,” they’ll say in their defense.

But these reporters feeling like they “have to” insult or accost Trump administration staffers or guests is nothing to be proud of, either.

Journalism and reporting, they’ll falsely tell you, is an historic tradition that should be kept free from opinion or bias.

That’s not true of course, since the first papers were political pamphlets, and even America’s founders used the press to ruthlessly smear and attack one another.

But, as Tony Soprano said, “If you can quote the rules you can [expletive] obey them”.

This is what the press hates. Not being able to break their own rules with impunity. They did it again, yesterday.

When the incident took place, New York Times reporter Katie Rogers posted a truncated video showing only the end of the confrontation, where Gorka gets in Brian Karem’s face to call him a “punk”.

She left out the minutes before when Karem was reportedly mumbling obscenities about the President and his supporters, and the part where he starts hurling abuse and calling people outside to “talk”.

It was this clip that got all the airplay. Promoted by Jim Acosta and his band of blue-tick verified friends.

Few if any of the press showed the clips by social media summit invitees Sergio Gor (as we did) or Jim Hanson.

And let me be clear, they had far better opportunities than I did, and we still beat them to contextualization.

While I was at the White House yesterday, I skipped the Rose Garden event, and was only alerted to the fracas over text message.

I blitzed through Twitter and Instagram to find a better video, with clearer sound and more context. Boom, we got it. And we got the accurate story up shortly after. It wasn’t hard.

Meanwhile, the White House press corps, who watched it all happen, chose to amplify a clipped version of events making Gorka look like the baddie.

This is intentional misinformation. It’s willful fake news. And it is designed to tear the country apart, and focus aggressive ire at right-wing figures.

AntiFa, as the President noted at the summit yesterday, scarcely attack big guys.

“They don’t show up at Bikers for Trump rallies,” he quipped.

And what Brian Karem and his friends are doing will endanger the lives of other pro-Trump, or right-leaning figures.

This is precisely what happened to Andy Ngo, who continues to be hospitalized following an attack by AntiFa.

Remember, the first attacks on Ngo came rhetorically. Online, and mostly by “reporters” who objected to his Wall Street Journal article on England’s Muslim neighborhoods. The kicks and punches came later.

And it is always them complaining about violence.

Establishment reporters endlessly carp on about being in the line of fire because the President tweeted a wrestling meme. Karem himself cried about it on Twitter in December.

But it is the right being attacked with milkshakes and bricks and sometimes a combination of the two.

It is the right being doxxed, and targeted, and harassed.

And it is the right being systematically erased from social media and the public square. Because our opinions run contrary to the accepted framing of the debate by our new overlords: the psychopaths of Silicon Valley.

We should all start quoting Tony Soprano at them.

“If you can quote the rules, you can… obey them”. 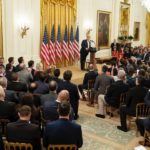 Our Take: President Trump is on Our Side in the Fight Between FakeNews and Citizen Journalists