There are few greater examples of President Trump truly bucking the political establishment than his anti-war stance. For too long, both parties have been directly responsible for a state of perpetual war throughout the Middle East, which has wasted the lives of thousands of American soldiers and trillions of taxpayer dollars.

Putting America First means putting her citizens first, and that includes its troops. President Trump, through his withdrawal from Syria, is making it clear that while our allies are important, our top priority should be protecting our own citizens and preventing more needless deaths.

Few campaign promises have been more difficult to keep than the ones that run afoul of the the defense industry and attendant “beltway bandits.”. Obama famously pledged – and failed – to bring home all troops within his first year in office. So once more, Donald Trump is succeeding where Obama failed.

This is not a surrender, or an “abandoning” of our allies. Our primary goal – eliminating the physical caliphate of ISIS – has been accomplished. Now we must do what all countries should do: Take care of our own citizens above. That is why we must bring the boys back home.

The Federalist: Why Trump Is Absolutely Right To Get U.S. Troops Out Of Syria

In a surprising late-night statement (late for the U.K., anyway), last week the White House declared that American troops will move aside and let Turkey invade Syria. “Turkey will soon be moving forward with its long-planned operation into Northern Syria,” the statement said, adding, “The United States Armed Forces will not support or be involved in the operation, and United States forces, having defeated the ISIS territorial ‘Caliphate,’ will no longer be in the immediate area.”

The statement continued, “The United States Government has pressed France, Germany, and other European nations, from which many captured ISIS fighters came, to take them back, but they did not want them and refused. The United States will not hold them for what could be many years and great cost to the United States taxpayer.”

Even though I am a conservative foreign policy realist, my research deals with great powers and neorealism, and I regularly advocate restraint and retrenchment and amoral realpolitik in these pages, I never in my wildest dreams anticipated waking up to an actual realpolitik move from the White House.

Naturally, the laments are severe. From Sen. Lindsey Graham to The Guardian and BBC, everyone is accusing the White House of giving up on U.S. responsibilities, and worse, “stabbing the Kurds in the back.” None of those is true. Moving American troops would be perhaps the most far-sighted thing Trump does as president, and it would be beneficial to the United States in the years to come.

Why Some Don’t Think So

Two separate arguments arise in opposition to this decision. One, that Americans have backstabbed the Kurds. The argument is false prima facie because the Americans were not in Syria to be the Kurds’ bodyguards.

The Kurds have been fighting the Turks for centuries, and the modern Kurdish forces, who are mostly followers of heavy left-wing Stalinist ideology, were allies due to their convergence of interests. In international relations, the theory of balance of threat suggests that whenever a new threat emerges, a balancing coalition develops. Historically, that might even include some fairly different and opposite forces, such as a revolutionary Joseph Stalin and reactionary Winston Churchill coming together to square off against Adolf Hitler.

Likewise, the American troops were positioned in the Middle East due to the simple reason that an Islamist sect had metastasized and formed a statelet, which turned expansionist, and a balancing coalition was needed. The balancing coalition had strange bedfellows. When Russians were bombing Aleppo, Western forces were simultaneously bombing Raqqa.

But that threat of ISIS as a state is over. ISIS is still there, but not as a state and definitely not as an expansionist nation. In fact, the majority of ISIS fighters and their families, including those deemed to be poor, brainwashed refugees by bleeding-heart nongovernmental organizations, are now threatening to take over refugee camps. Regardless, they are not an expansionist nation-state and should not require regular American presence.

While the Kurds were allies during the war against the Islamic State, they were also benefiting from generous American aid, weapons, and air cover. That need has now disappeared. If the U.S. Senate wishes to continue the new mission of “protecting the Kurds,” it has to authorize that.

The U.S.’s Biggest Challenge Is China, Not the Middle East

The second argument is about American presence itself in the region, something every foreign policy realist worth their salt opposed. The reality is this: America faces the biggest challenge ahead, not from the Middle East but from China. China — a great power, the second-largest economy in the world, with massive naval buildup, research in AI and genetics, a revanchist attitude in Asia, and which acts as the biggest influencer in American domestic politics — deserves the most attention, not some strategic backwater in Mesopotamia.

The idea that Iraq and Syria are important to American interests is from the 1980s and refuses to die. In reality, it has always been a battleground of three rival forces in the region: the Shiite Persians, the Sunni Ottomans, and the Orthodox Russians. They are still the three forces still vying for power in the same region. It is understandable given that dissident rebel groups within the three powers are directly related to what happens in the region, something Westerners have no need to worry about.

Turkey, Russia, and Iran were never historically natural allies, and they do not have natural alignment. Their proxies and satellites also differ from each other in the region. The only reason the three powers are not at each other’s throats is that a Western troop presence is stopping an all-out proxy war and providing all the three forces an alternative target to channel their rage.

The Turks support the Sunni proxies in the region, which are naturally opposed to a Shia Iran and Russian alliance with their satellite Bashar Assad. The most prudential course of action is, therefore, to let these forces duke it out and carve out their equilibrium. If in the process these forces get bogged down, bleeding each other in the region, and taking the security burden for stabilizing the region, it’s a win for the Western forces looking for ways to bail out.

U.S. Interests in the Middle East Have Shifted

Unfortunately, this balance of power-focused, amoral realpolitik is a way of foreign policy that doesn’t come naturally to the current establishment in London and Washington, which are used to thinking in post-Cold War humanitarian terms. A colder, rational strategy of offshore balancing, a preferred realist alternative, is often discarded.

I am fairly certain President Trump has not read the details of offshore balancing, or for that matter, the grand strategy of “bloodletting,” in which you let your opponents bleed each other. But he is nevertheless correct in his instincts.

The need to form a balancing coalition against the Islamic State disappeared with the end of the official Caliphate. The Europeans who are supposed to be the most affected by refugees should be spending their own money and manpower in guarding Europe’s border with Turkey. And Turkey, Russia, and Iran should balance each other in Mesopotamia with their own blood and treasure.

It is still early, and the bureaucrats and politicians have a way of slowing things down, but if Trump can pull out of the Middle East, conserve his resources, and focus all his attention to the growing menace of China, that is more farsighted a move than any post-Cold War American president thus far, and should be applauded. 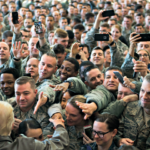 Our Take: President Trump is Keeping His Promise to Bring the Troops Home