While the Left and the media continue to hysterically treat the Coronavirus as if the sky is falling, President Trump is displaying the kind of cool, calm, and collected leadership that we need to address such a threat.

The President’s press conference on the coronavirus yesterday was exactly what was called for, a sign of assurance that the government is responding as needed to deal with the viral spread before it gets worse here in the US. President Trump is utilizing the full capacities of HHS, the CDC, and NIH to treat any and all affected individuals in the United States, in coordination with state and local officials, and with Vice President Mike Pence at the helm of the overall effort.

The reaction to the press conference by the Left, in both the legacy media and on social media, is indicative of what their end goal in this potential crisis is. They are perfectly content with seeing more Americans become infected, and even die, just so President Trump can be blamed. As with Hurricane Maria, or their failed impeachment, the Left continues to prove that they only care about their own political agenda, no matter the human cost. President Trump, however, is continuing to put the safety of the American people first, as he has done since 1200pm January 20th 2017 when he became our President. 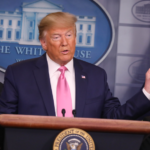 Our Take: President Trump is Fighting the Coronavirus