As the media tries to deflect with fake coverage of President Trump’s time at the G-7 Summit, the facts prove that President Trump is still delivering on his MAGA agenda.

The CBP unveiled a 60-mile stretch of brand new border wall that has just been completed in Arizona. This portion of the wall is in the Yuma Sector, one of the most highly-trafficked portions of the border. This is part of President Trump’s promise that over 400 miles of new wall will be completed by the end of 2020, thus fulfilling his signature campaign promise to Build the Wall.

And this comes even despite numerous attempts at obstruction by Democrats and left-wing activist judges, from refusing to vote for wall funding to endless lawless rulings that try to prohibit any wall construction from moving forward. If President Trump is able to accomplish this much with such resistance, then it is a testament to his capabilities as President, as well as his devotion to the American people.

The U.S. Customs and Border Protection unveiled a stretch of new border wall on the Southern Border and said it completed at least 60 miles in all.

“Construction crews continue work on the new border wall system along the SW border near San Luis” in Arizona, the agency wrote on Twitter.

The wall is located in the Yuma Sector, which is among the busiest along the southern United States.

According to Arizona station KOLD 13, work on more border wall sections has started in Arizona and New Mexico. The work on the wall, which was a campaign promise from President Donald Trump, stretches 46 miles west of Santa Teresa, New Mexico, and also is on 2 miles of the Organ Pipe Cactus National Monument in Arizona.

The workers broke ground on the construction between Columbus and Santa Teresa in New Mexico, KOLD noted on Aug. 23. In Arizona, crews were seen installing 30-foot steel fencing to replace barriers near the Lukeville Port of Entry.

In July, the Supreme Court ruled to allow Trump to use military funds to build sections of the wall. The money had previously been frozen by the lower courts.

By executive order, President Trump redirected previously allocated Defense Department funds to be used for the New Mexico and Arizona construction, according to The Associated Press.

The administration has awarded $2.8 billion in contracts for barriers covering 247 miles (390 kilometers), with all but 17 miles (27 kilometers) of that to replace existing barriers instead of expanding coverage.

Various forms of barriers already exist along 654 miles (1,046 kilometers) — about a third — of the border.

The construction comes as immigrant apprehensions have fallen sharply over the past two months due to the summer heat and a clampdown in Mexico.

Tens of thousands of people have come into the United States over the past year.

Construction is expected to take about 45 days. The government then plans to tackle two other projects in Arizona, including nearly 40 miles (64.4 kilometers) of fencing in other parts of the national monument and areas of Cabeza Prieta National Wildlife Refuge and San Pedro Riparian National Conservation Area. 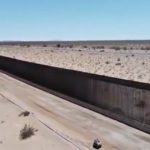 Our Take: President Trump is Delivering on Immigration