Of the many big promises that Donald Trump made on the campaign trail and has kept as President, few have proven to be a bigger success across the board than his handling of international trade.

As one of the main issues at the core of his 2016 campaign, President Trump vowed to throw out bad trade deals, renegotiate outdated ones, and implement tariffs whenever and wherever necessary. Now, after three years, he has delivered on this issues like no other president before him.

From the withdrawal from the disastrous TPP deal, to the numerous tariffs on China that led to the most recent “Phase One” trade deal between the U.S. and China, to the successful renegotiation of NAFTA with the USMCA, which has now passed Congress, he has proven correct in his ability to craft new deals in a way that benefits the American economy, American workers, National Security, and proves all of his critics wrong.

Protectionism works in an age of unfair trade practices by nations like China, and, alongside all of the newly-confirmed federal judges, has proven to be one of the single greatest success of President Trump’s first term, with even more to come after his re-election this November. 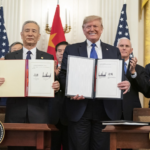 Our Take: President Trump has Won on the Issue of Trade