One of President Trump’s greatest achievements has been his uplifting of the African-American community, which he has done far more than any Republican or any Democratic president in modern history. And many black Americans are realizing this fact, as a recent Rasmussen poll shows him at an incredible 42% approval among black Americans.

There are many reasons for this, including the historic criminal justice reform bill signed last year, as well as his strict immigration policies making it easier for African-Americans to find work without having to worry about illegal immigrants taking their jobs. Such simple but effective policies have single-handedly done more for the black community in three years than the Democrats have done in 50 years. 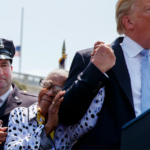 Our Take: President Trump has Done More for Black America than the Democrats Ever Did