There are multiple lessons that can be learned from President Trump announcing the sudden cancellation of a top-secret meeting with Taliban leaders, which had been planned to take place at Camp David.

First, it is yet another example of President Trump displaying his knowledge of The Art of The Deal. Just as with North Korea, sometimes walking away from the table is not only a necessary move, but the best move. Following an attack in Kabul that the Taliban was responsible for, which killed one U.S. service member, cancelling the meeting was the best way to send a clear message to the Taliban and all of our enemies abroad.

But second, and just as important, is the reminder that President Trump is still laser-focused on the issues and threats that truly do threaten our nation in an existential way. While the Democrats continue to rant and rave for seven hours about the myth of a “climate crisis,” President Trump is continuing to deal with a true threat like Islamic terrorism. That is why President Trump is the best bet for keeping America safe, and certainly more dedicated to protecting our nation than any of the Democrats.

President Donald Trump announced Sunday that he had canceled a secret meeting with major Taliban leaders at Camp David.

“Unbeknownst to almost everyone, the major Taliban leaders and, separately, the President of Afghanistan, were going to secretly meet with me at Camp David on Sunday,” Trump wrote on Twitter.

Trump said that Taliban leaders admitted responsibility for an attack in Kabul that killed a U.S. service member, a Romanian service member, and ten civilians near the United States embassy in Kabul.

He said that the Taliban was trying to “build false leverage” in the ongoing peace talks.

“I immediately cancelled the meeting and called off peace negotiations,” he wrote. “What kind of people would kill so many in order to seemingly strengthen their bargaining position? They didn’t, they only made it worse!”

Trump said that if the Taliban could not agree to a ceasefire, it was unlikely that they could negotiate peace.

“How many more decades are they willing to fight?” he asked.

Trump has vowed to end the war in Afghanistan, but conclusive peace talks between the Taliban and the Afghanistan government remain elusive.

“We’ve been a peacekeeper there, in a way, for 19 years and at a certain point, you have to say, ‘That’s long enough,’” Trump said in August. 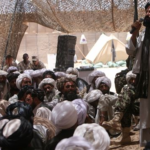 Our Take: President Trump and the Taliban Threat