The Democrats have not simply gone off the deep end, but they have done so in direct contradiction with what they told their voters. They have sacrificed any and all basic political foundations, or any semblance of “principles,” at the altar of one thing and one thing alone: Trump hatred.

Despite promising voters in 2018 that they would not push for impeachment, they are now doing just that. Despite once being notorious for being the anti-war party, the Democrats now suddenly support war in Syria solely because President Trump wants to bring the troops back home. They are going out of their way to alienate everyone, from moderates to their own base, just to be the opposite of President Trump in every way possible. Outside their little bubble in the Swamp, the American people across the board are fed up with them.

On what issue will the Democrats flip-flop next just to be against President Trump? Call in and tell us what you think, at 833-334-6752.

Breitbart: The Nuclear Option: The Voters Are Still in Charge – For Now

Message to the Swamp: American voters still are supposed to be in charge.

That means they get to decide who gets elected. For example, in 2016, they elected a man named Donald Trump. He is still the president. Go suck an egg if you don’t like it.

It also means that American voters get to choose where our soldiers, sailors, and airmen get deployed around the world. They choose that by electing “representatives” to Congress, who vote to declare wars. They also get to choose the commander in chief of America’s mighty military. (Again, see previous paragraph about a man named Donald Trump, who is still president. And feel free to go suck another egg.)

In addition, American voters get to choose — again, through the “representatives” they have elected — how much money we spend on bombs and ammunition and where we deploy them. Most important, American voters choose where all that firepower gets launched and who, exactly, gets killed by American bombs and bullets.

That is the way this is supposed to work.

For more than two years, Britain under Prime Ministers Neville Chamberlain and Winston Churchill begged American President Franklin D. Roosevelt to join the fight against Nazi Germany. Roosevelt was more than sympathetic. But he understood that he could not do so unless and until the American people understood the fight, knew who the enemy was, comprehended the risk of getting involved and supported the mission.

Then — and only then (with a little push from the Japanese navy) — could Roosevelt join Churchill to defeat the greatest threat to the civilized world in the 20th century. And with the approval and enthusiasm of the American voter, the enemy was annihilated.

There are a lot of differences between the global threat Roosevelt defeated in Germany and the global threat Mr. Trump faces now in the Syrian civil war. But one thing remains the same: American voters are still in charge.

The disconnect between voters back home and politicians in Washington is cavernous. Mr. Trump is one of the only politicians to hear the voice of the people and obey it.

Of course, these very same politicians could be brave adults about it and Congress could vote to declare war in Syria. But that might cost them an election back home.

A common response around here when you suggest that Congress should vote to declare war is: “Declare war on whom?”

Exactly! Even these people don’t know whom to fight over there. Yet it is the American people (and Mr. Trump) who are so deeply immoral for wanting to get out of this insane, faraway fight.

The other explanation you hear from people around here is that we are not really at war over there. Sure, we are helping kill people and all, but we are actually on a “peacekeeping” mission.

OK. That’s probably the biggest reason to get out of Syria. All our “peacekeeping” is not working. 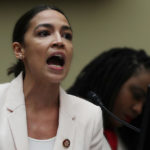 Our Take: President Trump and the American People are Fed Up with the Democrats