The Democrats have finally accomplished what they wanted, and put their rank partisanship over the well-being of the country. They were determined to put a undeserved black mark on President Trump’s record, and that stain comes in the form of impeachment.

But despite yesterday’s despicable vote, President Trump remains stronger than ever before. Not only are his approval ratings continuing to rise, but he is openly defying this fake impeachment in every way possible. Only Donald J. Trump would think to spend the night of his impeachment by holding a rally before thousands of his supporters, and that is exactly what he did.

And President Trump’s supporters are stronger than ever as well. The voters gathered in Michigan were representative of the electrified energy that is now surging through every Trump voter, as the Democrats wage their greatest attack yet against the duly-elected President. The stakes have been made clear, and millions of Americans know exactly what they are going to do about it.

So while the Democrats may have had their meaningless victory by making President Trump only the third U.S. President to ever be impeached, they will pay dearly for it in the long run. The Silent Majority is being awakened, and they are rallying behind President Trump to Make America Great Again. 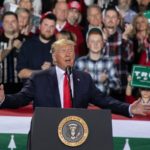 Our Take: President Trump and His Supporters are Stronger than Ever