We are now one year away from the 2020 election, which could very well be the most significant presidential election of our lifetimes.

2016 was the start of a peaceful political revolution, the likes of which our country has never seen before. And that revolution was a success, despite the strongest efforts of the mainstream media, the Deep State, both parties, and other institutions that were firmly entrenched in the Swamp. They lost, and the American people won.

But 2020 will be a test of whether or not we wish to reaffirm the same principles upon which this movement was built in 2016. It will determine whether or not the MAGA agenda that got Donald Trump elected President of the United States is not only alive and well, but still supported across the nation.

2020 will represent the clearest choice yet between two drastically different visions of the future of our country: A free and prosperous land where American interests and the American people come first, or a socialist and totalitarian nation that replaces what was once America. The Democrats have made it clear how much they utterly despise the values upon which America was founded, and thus seek to fundamentally transform it.

Come November 3rd, 2020, Americans will make that choice. And God willing, they will, once again, make the right choice. 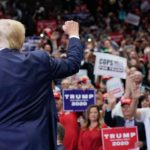 Our Take: One Year From Now, America Has Only One Choice