Despite the intense polarization of the political environment, we can always count on President Trump to show us what true class and civility looks like.

Following the death of longtime Democratic congressman Elijah Cummings, tributes poured in from all across the political spectrum. But few were as graceful or heartfelt as President Trump’s, as he tweeted out his condolences to the congressman’s family, while also ordering the White House flag to be flown at half-staff in honor of Cummings.

This civility is important to remember, for even as our elected officials engage in furious arguments, and the Democrats increasingly resort to vicious character attacks and violent rhetoric, President Trump shows is what is it to rise above the frey when you need to. In doing so, he is further setting an example that his opponents should follow. Although they won’t.

President Donald Trump issued a proclamation Thursday ordering that the American flag be flown at half-staff “at the White House” and at other government facilities throughout the U.S.:

“BY THE PRESIDENT OF THE UNITED STATES OF AMERICA

As a mark of respect for the memory and longstanding public service of Representative Elijah E. Cummings, of Maryland, I hereby order, by the authority vested in me by the Constitution and the laws of the United States of America, that the flag of the United States shall be flown at half-staff at the White House and upon all public buildings and grounds, at all military posts and naval stations, and on all naval vessels of the Federal Government in the District of Columbia and throughout the United States and its Territories and possessions through October 18, 2019.

I also direct that the flag shall be flown at half‑staff for the same period at all United States embassies, legations, consular offices, and other facilities abroad, including all military facilities and naval vessels and stations.

IN WITNESS WHEREOF, I have hereunto set my hand this seventeenth day of October, in the year of our Lord two thousand nineteen, and of the Independence of the United States of America the two hundred and forty-fourth.”

Trump also expressed his condolences to Cummings’ family and friends in a Thursday tweet.

“My warmest condolences to the family and many friends of Congressman Elijah Cummings,” Trump wrote on Twitter. “I got to see first hand the strength, passion and wisdom of this highly respected political leader. His work and voice on so many fronts will be very hard, if not impossible, to replace!”

Cummings died at the age of 68 from health complications and had not returned to work after having a medical procedure he said would only keep him out of the office for a week.

The procedure caused Cummings to miss a hearing on Washington, DC, statehood. Cummings served as a congressman for Maryland’s 7th Congressional District since 1996. 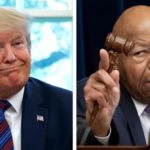