As the anti-Semitic congresswoman Ilhan Omar and Rashida Tlaib continue to bleat about the “injustice” of being “banned” from Israel, remember that they are only doing so because they lost.

From the start, their plan was never about promoting peace in the region. From their official itinerary labeling the country as “Palestine,” to their trip being funded by a vicious anti-Semitic organization, it is clear that they always intended to simply grandstand and virtue-signal against the Jewish state and the Jewish people from right within their own borders. Such arrogance and blatant racism is who these Democrat politicians are.

This incident is a complete victory for President Trump and Prime Minister Netanyahu. The two leaders stood shoulder-to-shoulder against racism, and instead of showing the weakness that allowing the women into the country would have shown, they took a stand and declared that their hatred and anti-Semitism is not welcome in the land of Israel. This should be the message sent to all anti-Semites here and abroad, from the BDS movement to its sponsors in Congress, until this bigotry is completely rejected by all decent people.

In a news story about Israel’s decision to bar Reps. Rashida Tlaib and Ilhan Omar from entering the country, The New York Times’ Jerusalem-based correspondent, Isabel Kershner, echoed the opinion of many in the media and the Democratic Party when she wrote that President Trump’s pressuring of Israel’s Benjamin Netanyahu into blocking the congresswomen’s visit was a grave offense against American democracy.

“Mr. Trump’s decision to recommend that another country block entry to two United States citizens, let alone members of Congress, was one of the most pronounced violations of democratic norms that he has engaged in since taking office in January 2017,” Kershner wrote.

Hang on. You could convincingly argue, as many have, that blocking Tlaib and Omar’s visit is a bad idea. You could point out that Netanyahu’s apparent reversal on this issue — he was originally inclined to let the two in — is at best a cheap bit of electioneering, and at worst a reflection of weak leadership. You could sing the praises of bipartisanship, or of the power of dialogue to move hearts and minds, or of the open society and its many merits. But describing this as a never-been-seen-before violation of democratic norms is simply bonkers.

Let us revisit the facts.

In 2005, Narendra Modi, now India’s premier, was getting ready to visit New York and address a rally for Indian-Americans. The visit never happened: Invoking an obscure 1998 law that prohibits foreign leaders responsible for “severe violations of religious freedom” from receiving a visa to enter the United States, the State Department argued that, having failed to stop deadly riots years earlier in which Hindus killed Muslims in Gujarat, where he was the top official at the time, Modi shouldn’t be allowed in.

The Obama administration kept its predecessor’s ban in place for a long time, even though Modi was the only person against whom the 1998 law was ever applied.

Similarly, Great Britain has banned a host of individuals whose opinions or actions it found distasteful: In the 1950s, for example, it refused to let Menachem Begin in, arguing that the Israeli parliamentarian — and future prime minister — was once engaged in violence against Her Majesty’s Armed Forces as a leader of the pre-state paramilitary Irgun. More recently, another Israeli politician, Moshe Feiglin, was instructed to stay out of London as well.

Feiglin, read a letter from Britain’s Border and Immigration Agency, was “seeking to provoke others to serious criminal acts and fostering hatred which might lead to inter-community violence in the UK.”

The Dutch right-wing MP Geert Wilders received a similar note, this time from the Home Office, informing him that his opinions “threaten community harmony and therefore public safety.”

You may be shocked to learn that none of the aforementioned cases was described in terms of a severe blow to the body politic or a treasonous Western democracy.

Instead, it was understood in context: Exercising their right to defend themselves, democracies reserve the right to keep out anyone they feel might endanger them in any way.

American law goes on at length regarding the various categories of people who may be barred from entering the United States, including those with communicable diseases, those convicted of certain crimes and anyone who “seeks to enter the United States to engage solely, principally, or incidentally in . . . any activity a purpose of which is the opposition to, or the control or overthrow of, the government of the United States by force, violence, or other unlawful means.”

Israel has similar laws. Its argument that avid supporters of a movement, BDS, whose overtly stated goal is the destruction of Israel as a Jewish state represent a threat to the country may not be politically savvy, but nor is it unprecedented or indefensible.

In the coming days, we are likely to hear much more about Netanyahu and Trump marching their respective countries towards illiberalism and stupidity. Maybe.

But in this, they have plenty of help from scores of opposition pundits and politicians, who are addressing these moves not with reason or solid argument or even simple, genuine feeling, but with outlandish statements that are at best ignorant of history and at worst outright lies.

Democracy dies not only in darkness, but in madness as well. 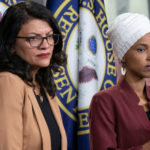 Our Take: Omar and Tlaib’s anti-Israel Ploy has Failed