There is truly no low to which the Democrats will not sink.

Sometimes it’s not the large-scale atrocities that are the most despicable. Shredding the Constitution and abusing the impeachment process are disturbing enough, but in a way, attacking a 13-year-old child for cheap political points is worse.

The Democrats obviously rehearsed that pitiful exchange with “star witness” Pamela Karlan in which she mocked Barron Trump’s name; even the laughter afterwards was as fake as can be. (ADD LINK to segment with Boris) But nevertheless, it showed that they truly think it is perfectly acceptable to attack a minor who has nothing to do with impeachment just because his last name is Trump.

And make no mistake; Karlan did not apologize because she legitimately felt bad about what she did. She apologized only because of the backlash, and because she folded like a cheap suit under the slightest pressure when she no longer had a microphone, a spotlight, and a script handed to her by the Democrats. That fake apology only proves that her true nature, and the rest of the Left, lies with their spiritual fuel, which is hatred; that is who they are, and such bile is all they know. 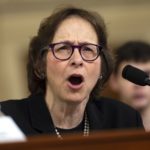 Our Take: Nothing is Off-Limits for the Democrats