The first part of the first Democratic debate was about everything you would expect: Heavy on the virtue-signaling, light on the specifics, and an utterly pathetic attempt by all the candidates to scramble over each other in a race to the far-left.

Former HUD Secretary Julian Castro talked about “trans women” having the “right” to get an abortion, even though that’s not biologically possible. Cory Booker lamented that more needs to be done for “African-American trans-Americans.” A handful of the candidates actually declared the nation’s biggest geo-political threat to be…global warming. Not a nuclear Iran, militant China, or resurgent Russia, but the weather.

Whichever radical is unlucky enough to become the nominee, they will be utterly demolished in a debate against the President; that will make for a far more satisfying and enjoyable display than what we witnessed last night. Roll on, 2020.

PJ Media: Trump’s Response to the Democratic Debate Is All of Us

On Wednesday night, Americans got to see the radical rush to the left on full display in the first 2020 Democratic presidential debate. Yet the first debate had serious technical issues and did not involve either of the two frontrunners, former Vice President Joe Biden and Sen. Bernie Sanders (I-Vt.). President Donald Trump reviewed the debate with one word and slammed the “fake news” outlets organizing it.

“BORING!” the president tweeted a half hour in.

“[NBC News] and [MSNBC] should be ashamed of themselves for having such a horrible technical breakdown in the middle of the debate,” Trump tweeted. “Truly unprofessional and only worthy of a FAKE NEWS Organization, which they are!”

Moving on from the debate, the president tweeted a video about his trip to visit U.S. troops in Alaska.

Then Trump decided to get silly. He tweeted a video showing “Trumpism” extending further and further into the future. It featured a TIME cover reading, “How Trumpism Outlasts Trump,” with a series of yard signs reading “Trump 2024,” “Trump 2028,” and so on until “Trump 2048.”

Compared to the nonsense spouted from the stage at the Democratic debate this evening, Trumpism doesn’t sound too bad, and the video becomes more hilarious as I think about it.

I don’t always agree with the president, but I can’t help getting a bit slap-happy after watching the horrendous Democrats go at it with one another. After all, a former HUD secretary pushed for biological men to get taxpayer-funded abortions, a New York mayor demonized private health insurance, and a senator chided a congresswoman for being insincere right after she supported one of his major legislative goals. Even the moderators couldn’t get their mics right. 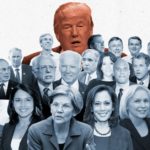 Our Take: None of the Democrats Can Take on President Trump