If the biggest development of the first half of 2019 was the turnaround in President Trump’s war with the Deep State, with the counter-investigations started by Attorney General Bill Barr and U.S. Attorney John Durham, then the second-biggest development is the beginning of the end for the failed “Never Trump” movement.

From the moment he first came down to the escalator, to the later successes and historic achievements of his presidency, Donald J. Trump has always had to withstand the preening “Principled Conservatives” crowd biting at his heels. They have always been far less of a threat than the mainstream media, the Democrats, or the government surveillance against the Trump team, but they have also managed to be just as irritating, if not more so.

President Trump moves forward, with historically high approval ratings among Republican voters and some of the highest approval ratings of his presidency. So it should come as no surprise that, over the course of the last few days, there have been several more significant departures within the ever-shrinking and pathetic anti-Trump crowd.

Over the weekend, two of the most highly-favored candidates for a potential intra-party challenge to the President in 2020, former Ohio Governor John Kasich and Maryland Governor Larry Hogan, have both announced that they will not challenge him after all. This comes after both men met with the sad little “godfather” of Never-Trumpers, Bill Kristol.

As if their dwindling electoral prospects weren’t clear enough indications of their shrinking popularity, the end of the possibly sexually-repressed Jonah Goldberg’s tenure at National Review has only further driven the point home. Ever since the Weekly Standard folded (and its replacement, The Bulwark, has gone absolutely nowhere), National Review has remained the last bastion for the snobby conglomerate of fake conservatives who make up “Conservatism Inc.”

And, as recent reports suggest, even the long-running National Review may soon be nearing its end as well, while renewed and revitalized publications like Human Events, which remain firmly behind the President’s MAGA agenda, rise to surpass these websites of old. This shift in the body politic of the Right, and the finale of the endless grandstanding, posturing, and virtue-signaling of the Never Trump crowd can’t possibly come fast enough.

“Bill Kristol’s new venture, this moronic Bulwark, might as well be The Atlantic or a left-wing publication. I think [Never-Trumpers] are irrelevant in conservative circles,” said John Cardillo, host of America Talks Live on Newsmax.

Cardillo joined Dr. Sebastian Gorka on his radio show ‘America First’ to discuss the Never-Trumpers and their relevancy, or lack thereof.

“These guys are just in too deep,” Cardillo explained, “They get their speaking gigs, they get their donors, all the establishment hacks who are obsolete dinosaurs. So they can’t give up the revenue stream, because they’ve got no where else to go.”

Gorka inquired about the relevency of the Never-Trump crowd, to which Cardillo replied “They already are irrelevant.”

When Dr. Gorka asked Cardillo if he thinks the Never-Trumpers actually believe what they say or are just pandering to donors, he responded, “They don’t believe a word of it.”

Gorka said the following in reference to a tweet by Jonah Goldberg: “Who are these people? I mean are the Never-Trumpers just sexually repressed nerds who never quite got out of being wedgied in school?” In the tweet, Goldberg quoted Gorka and said “It’s like you used that macho tourniquet of yours for autoerotic asphyxiation one too many times and you can’t even muster the brain cells for something clever.” 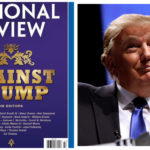 Our Take: Never Trumpism is Coming to an End