Her bizarre rant against stellar investigative reporter James Rosen is just the latest proof. Make no mistake that Pelosi is indeed motivated only by hate at this point in her scandal-ridden and floundering political career. Her shallow attempts to shield her actions with her “faith“ only betrays how desperate (or senile?) she has become.

Democrats have had it out for President Trump since 19 minutes after his inauguration. Pelosi herself has led the way on many of the false charges against him, from blocking any and all legislation to openly calling him a criminal. Although she had previously resisted impeachment before, she has, as a result of the “Squad’s” pressure, since fully embraced this sham process and is now determined to go all the way with it, even as it proves increasingly unlikely to succeed, and more likely to cost the Democrats the House of Representatives and probably more.

When all political calculation, logic, and common sense are thrown out the window in the pointless pursuit of an impossible objective, it is clear what is the only factor left influencing her decisions. And yes, Mrs. Pelosi, that word is indeed “hatred.” 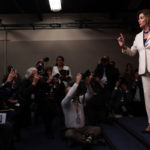