As one of our callers said on yesterday’s AMERICA First program, September 24th, 2019, could very well go down in history as the day that President Donald J. Trump won re-election.

The Democrats just couldn’t help themselves and overstepped their boundaries in the most egregious way so far. Even after their numerous prior attempts, from so-called “Russian collusion” to unproven allegations of “obstruction of justice” failed spectacularly, they just had to keep trying to find new excuses for their impeachment hysteria.

And the truly good news that this bad decision represents, besides the major victory this hands to President Trump, is that the Democrats have no way out of the hole into which they have just dug themselves. Pelosi has but two options: She either commits to impeachment and tries to force it through, almost certainly dooming her party, or she backs down and risks further enraging the far-Left.

It is not a situation that any of us should feel sorry for the Democrats about, considering that they brought this entirely on themselves. They might as well be casting their ballots for Donald Trump now and save themselves the trouble.

Breitbart: Trump Ridicules Impeachment: Democrats Have ‘No Idea’ How to Stop Me

President Donald Trump ridiculed Democrats on Tuesday for a renewed impeachment effort in the House of Representatives, suggesting it was a sign they were worried about him winning re-election.

“I think it’s ridiculous. It’s a witch hunt. I’m leading in the polls. They have no idea how they stop me,” Trump said. “The only way they can try is through impeachment.”

Trump argued that beginning impeachment hearings over a phone call with a foreign leader was unprecedented.

“This has never happened to a president before,” he said.

The president commented on the issue as he arrived at the United Nations Assembly on Tuesday ahead of his speech to world leaders.

Democrats and the establishment media are driving the narrative that Trump may have frozen military defense spending for Ukraine as part of a quid pro quo to get officials to investigate former Vice President Joe Biden’s son. The president has denied it.

Trump said his phone call with Ukrainian President Volodymyr Zelensky was “perfect” and that there was “no pressure put on them whatsoever.” 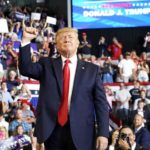