The last seven days may just have been one of the worst weeks ever for the Democratic Party, from the disastrous Iowa caucuses and President Trump’s acquittal in the Senate impeachment trial.

After stalling on impeachment for as long as possible to save the so-called “moderates” in her party, Pelosi finally caved to the pressure from the far-left, including the Four Horsewomen of the Democrat Apocalypse, the so-called “squad.” And then, after finally being forced to go all-in on a sham impeachment, she lost that battle with President Trump’s vindication in the Senate.

Her frustration at her own failures manifested in the pathetic display of ripping up President Trump’s speech at the State of the Union address. In that moment, she lost complete control and acted not like an adult or a leader, but like a child throwing a pathetic tantrum. In doing so, she only succeeded in alienating more Americans than ever before, including many Democratic voters, as witnessed by the incredible reaction after her display from former Democrat callers to C-SPAN.

And that, more than anything else, will be her ultimate undoing if the Republicans are subsequently able to retake the House of Representatives this November. Pelosi’s legacy will be solidified as one of failure, lack of restraint, and bitter partisanship over the well-being of the nation. And she only has herself to blame. 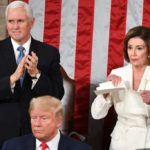 Our Take: Nancy Pelosi Has Lost All Control