The so-called “impeachment” of President Trump has always been a political stunt, nothing more and nothing less. President Trump and other Republicans have emphasized this by pointing out how no official vote has yet been taken to begin formal impeachment proceedings in the House.

Yesterday, Nancy Pelosi once again deflected and refused to hold a vote on real impeachment proceedings. She refused to do so in order to keep Democrats in sole control of the faux process, including subpoenas and committee hearings, and also to shamelessly protect vulnerable Democrats in districts that President Trump won in 2016 and who would have to publicly make a stand against the most successful President since Ronald Reagan if there were a vote.

The latter especially proves the political motivations in a twofold manner. First, Pelosi is more focused on maintaining the Democratic majority in the House than actually getting anything done with it; and second, she is attempting to appease the far-left base while still trying to not endanger the putative “moderate” Democrats in her caucus.

House leaders could reassess their decision at some point, the report notes. The report comes after Politico reported earlier Tuesday that House Democratic leaders are asking vulnerable members if they would support a formal vote.

Leaders are “getting a read on where these members are following a two-week recess,” an aide noted. Pelosi, who was reticent at first to promote an impeachment inquiry, is lobbying her caucus to go on the record.

“I’ll be talking about that later today, after I meet with my colleagues,” the California Democrat told reporters, referring to whether she intends to get a feel for how the moderate wing of her party feel about the idea.

“Unfortunately, you have given no clear indication as to how your impeachment inquiry will proceed — including whether key historical precedents or basic standards of due process will be observed,” McCarthy, a California Republican, said in an Oct. 3 letter to Pelosi. She dismissed the letter, saying Democrats don’t need a formal vote.

Trump is refusing to cooperate with House Democrats’ inquiry.

“In the history of our nation, the House of Representatives has never attempted to launch an impeachment inquiry against the president without a majority of the House taking political accountability for that decision by voting to authorize such a dramatic constitutional step,” the White House said in a statement to Pelosi.

Pelosi’s office has not yet responded to the Daily Caller News Foundation’s request for comment. 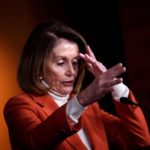