Nothing spells desperation quite like resorting to the exact same tactics that failed before and expecting them to finally work this time. But that is exactly what the Left is doing now, as they witness the increasing popularity of President Trump.

According to “reports,” unnamed government officials are claiming that Russians are, once again, trying to help President Trump win a second term. Of course, just like the initial claims of “Russian collusion,” they have presented no evidence whatsoever to back up their claims. But that hasn’t stopped the media from taking these stories and running with them as the truth.

After every other ploy failed – from tax returns and the “Stormy Daniels” hoax, to a Ukrainian “quid pro quo” – the Left is so thoroughly defeated that they are now right back to square one, and demonstrating Albert Einstein’s definition of insanity. If history is any indication, then we all know exactly where this will take us: This latest version of the hoax will be exposed, and President Trump will win again despite their fear-mongering. America knows better. 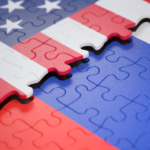 Our Take: Like a Zombie, the Russia Hoax Returns