There are few things that the Left is worse at than accepting defeat. In few instances is this clearer than the confirmation of Supreme Court Justice Brett Kavanaugh.

Knowing full well that his confirmation to succeed Justice Anthony Kennedy meant a conservative majority on the Supreme Court, and with it the possible end of Roe v. Wade, the Left pulled every single despicable dirty trick in the book. When their protests and endless loaded questions failed, they tried to resort to false allegations of sexual misconduct. Those failed too, and Kavanaugh was rightfully confirmed.

Yet now, a year later, they still cannot accept that they lost. That is why they are dredging up the same debunked allegations, only told through a slightly different lens, to try and defame him again.

They do this because character assassination is all they have. When they know that neither facts nor morality are on their side, they resort to tactics that are devoid of both, in the hopes that simple intimidation will silence their opposition. But just as with the allegations one year ago, the truth remains on our side once more. We must remain firmly behind Justice Kavanaugh, so that Truth may prevail again.

Breitbart: Democrats Call for Justice Brett Kavanaugh to Be ‘Impeached’

A growing number of Democrat presidential candidates and groups are lining up behind calls to impeach Supreme Court Justice Brett Kavanaugh, after the New York Times reported that the FBI did not follow up on a woman’s story that he had pulled his pants down and thrust his penis at her at a college party.

The report came from a forthcoming book written by two Times reporters titled, “The Education of Brett Kavanaugh.”

The first of the candidates to call for Kavanaugh’s impeachment was former Housing and Urban Development Secretary Julian Castro, who tweeted on Saturday, “It’s more clear than ever that Brett Kavanaugh lied under oath. He should be impeached.”

The second candidate to call for Kavanaugh’s impeachment was Sen. Kamala Harris (D-CA), who is a member of the Senate Judiciary Committee.

“I sat through those hearings. Brett Kavanaugh lied to the U.S. Senate and most importantly to the American people. He was put on the Court through a sham process and his place on the Court is an insult to the pursuit of truth and justice. He must be impeached,” she tweeted.

Shortly after, Sen. Elizabeth Warren (D-MA) called for Kavanaugh’s impeachment. She was also among the first candidates to call for President Trump’s impeachment.

“Last year the Kavanaugh nomination was rammed through the Senate without a thorough examination of the allegations against him. Confirmation is not exoneration, and these newest revelations are disturbing. Like the man who appointed him, Kavanaugh should be impeached,” Warren tweeted Sunday:

He tweeted, “Yesterday, we learned of another accusation against Brett Kavanaugh—one we didn’t find out about before he was confirmed because the Senate forced the F.B.I. to rush its investigation to save his nomination. We know he lied under oath. He should be impeached.”

Sen. Bernie Sanders (I-VT) said he supported “any appropriate constitutional mechanism” to hold Kavanaugh accountable, but did not specify whether that meant impeachment or an investigation.

“As a federal judge who overwhelmingly sided with corporate power and Wall Street, Brett Kavanaugh should never have been nominated. Supreme Court justices are not above the law. Someone who sits in judgment over the nation should have the highest integrity,” he tweeted.

“The revelations today confirm what we already knew: During his hearing, Kavanaugh faced credible accusations and likely lied to Congress. I support any appropriate constitutional mechanism to hold him accountable,” he tweeted.

Sen. Amy Klobuchar (D-MN) has not called for Kavanaugh’s impeachment, but spoke on ABC News’ This Week on Sunday about how the Justice Department would have to turn over documents of their investigation to Congress for any potential impeachment hearing.

Several progressive groups also called for Kavanaugh to be impeached — The Center for Popular Democracy, Women’s March, and Demand Justice, according to a Hill report.

They plan to protest Kavanaugh’s confirmation outside of the Supreme Court on October 6, a year after he was confirmed. 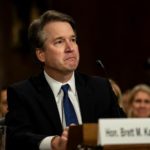 Our Take: Kavanaugh: The Left’s Endless Smear of a Good Man