Ex-Congresswoman Katie Hill’s sex scandal represented a clash between the two most powerful forces in media today: Irrefutable evidence for all to see, and a stubborn mainstream media that refused to cover it due to its political bias.

The photos were published for all to see. Hill’s divorce and the account of the 22-year-old staffer involved all but confirmed it. Yet despite her denials and the FakeNews media turning a blind eye, public pressure was stronger than ever and persisted until a House Ethics Committee investigation was formally launched. Only then, with the writing on the wall, did Hill finally concede defeat and resign a total disgrace.

This is a watershed moment in the fight against FakeNews, proving that public opinion and concentrated social media campaigns can overpower the legacy media and deliver results anyway. Even with the media on her side, a sitting member of Congress was forced out because the public outcry was so great that even she could not ignore it from within her Washington D.C. bubble.

Could this lead to a whole new era of public accountability? Call in to AMERICA First and tell us your thoughts: 833-334-6752. 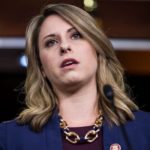 Our Take: Katie Hill Resignation Proves the Tide is Turning