This weekend gave us all a stark reminder that the enemy of your enemy is not always your friend.

Although Representative Justin Amash (MI-3) is registered as a Republican, he is not a friend of conservatism, President Trump, or the American people. By becoming the first (and currently only) “Republican” to call for President Trump’s impeachment, he has demonstrated that he is only in it for himself and seeks to curry favor with the Left and the mainstream media. This is evident given the fact that Amash, in his entire Twitter tirade, did not once provide a single example of President Trump’s allegedly criminal behavior.

Yet the ploy is already working, with Adam Schiff immediately praising the cowardly Amash.

To those who have been paying attention to him, however, this should come as no surprise. Amash, who touts himself as more of a “libertarian” than a conservative, proved his open borders bona fides by previously voting against funding the border wall, as well as voting against President Trump’s national emergency declaration.

Other Republicans who are opposed to securing our borders have not gone as far as Amash. When even Mitt Romney disagrees and says that President Trump should not be impeached, you know that the person in question must truly be the most RINO of all RINOs. Yet Amash not only touts himself as a Republican, but is even a member of the Freedom Caucus. That is about as fitting as John McCain or Jeff Flake being labeled as pro-Trump.

One last note: Amash is going into the 2020 election with not one, but two primary challengers. This may explain his unquenchable desire for attention.

The Daily Caller: Trump Hits Back Against GOP Rep Who Took Stance On Impeachment: ‘Justin Is A Loser’

“Never a fan of Justin Amash, a total lightweight who opposes me and some of our great Republican ideas and policies just for the sake of getting his name out there through controversy,” Trump wrote Sunday.

“If he actually read the biased Mueller Report, ‘composed’ by 18 Angry [Democrats] who hated Trump, he would see that it was nevertheless strong on NO COLLUSION and, ultimately, NO OBSTRUCTION… Anyway, how do you Obstruct when there is no crime and, in fact, the crimes were committed by the other side? Justin is a loser who sadly plays right into our opponents hands!” he continued.

Amash took his stand on impeachment Saturday in a tweet after reading special counsel Robert Mueller’s report into potential Russian election meddling.
He wrote Attorney General William Barr “deliberately misrepresented” Mueller’s report in his summary and that “Trump has engaged in impeachable conduct.”

Members of Amash’s own party widely criticized the libertarian-leaning congressman for his stance.

“It’s sad to see Congressman Amash parroting the Democrats’ talking points on Russia,” Republican National Committee Chair Ronna McDaniel wrote on Twitter Saturday. “The only people still fixated on the Russia collusion hoax are political foes of Donald Trump hoping to defeat him in 2020 by any desperate means possible.” 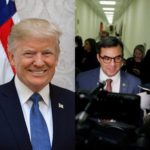