If there was one good thing that came out of the first Judiciary Committee impeachment hearing yesterday, it was one of the four star witnesses: Professor Jonathan Turley, the only one who is not blinded by hatred and a leftist bias and who has remained faithful to the Constitution.

Professor Turley was absolutely correct in his indictment of the entire impeachment process. It has been rushed, has been based on inconclusive evidence, and is a textbook example of how not to impeach a President.

While the other three “professors” preached about the history of impeachment and how it was supposedly crafted by the Founders specifically to deal with Presidents like Donald J. Trump, Turley was the only one who actually understood what the Founders envisioned: That their true fear was the impeachment process would be being weaponized for partisan purposes like it is right now, rather than being reserved for only the most dire crises. 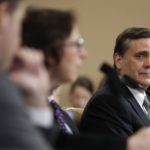 Our Take: Jonathan Turley is Right: There’s No Evidence of Impeachable Offenses