There is no other to say it, but it is inevitable: Joe Biden’s presidential campaign is done, and he seems to be the only person who hasn’t realized this yet.

Biden just could not satisfy anybody, from the rabid far-left base that see him as an “old white man,” to the moderates he once spoke to as he tried to adopt more radical “progressive” positions, and now to the independent voters who see his Ukraine scandal for what it is: Blatant corruption, nepotism, and an abuse of power.

Joe Biden’s top political donors gathered for an emergency closed-door meeting this weekend in Philadelphia, Pennsylvania, as his campaign falls behind rivals in both funds and polling.

The New York Times was first to report the meeting on Sunday, noting the financiers were treated to a behind-the-scenes view of the campaign’s headquarters and strategy, including a private address by the former vice president.

“In a sign of the attendees’ significant financial firepower, Mr. Biden himself addressed the several dozen donors who came to the retreat on Saturday, rallying them for 45 minutes about the months ahead, people there said,” the Times reported. “The campaign kept the session with Mr. Biden behind closed doors, despite pledging to open them to the press.”

The meeting comes as the campaign is besieged by questions over Hunter Biden’s business dealings in Ukraine as well as polls showing the former vice president is no longer the frontrunner among 2020 Democrats. Biden, who once led the field by as much 26 percentage points, now trails Sen. Elizabeth Warren (D-MA) in the early states of Iowa and New Hampshire.

Adding to the campaign’s trouble is the fact that their fundraising numbers were eclipsed this quarter not only by Warren but also Sen. Bernie Sanders (D-VT) and South Bend Mayor Pete Buttigieg — who polled significantly below the former vice president.

Biden’s mounting problems and the emergence of Warren as the most direct threat was not far from the minds of those gathered in attendance in Philadelphia.

“We need him to get the nomination because he’s the one who can win,” Denise Bauer, a Biden bundler and former ambassador to Belgium, told the Times. To stress the point, she added that the former vice president’s donors were “going to try to raise every single dollar we can.”

It is unclear if such efforts will be successful enough to save the 76-year-old Biden’s third White House bid. Unlike Warren or Sanders, the former vice president’s fundraising has failed to diversify past the top-dollar level. According to the Center for Responsive Politics, more than 2,800 donors have already maxed out to Biden’s campaign since his announcement in late April. Top-dollar donors make up a far higher percentage of Biden’s campaign’s coffers than those of his competitors.

In comparison, only 38 percent of the campaign’s funds to date have come from individuals donating less than $200. Such a ratio poses an issue for the former vice president, especially now that his top contributors are prohibited by law from donating again until after he’s secured the nomination. David Kochel, the former chief strategist for Jeb Bush’s failed 2016 presidential bid, explained the problem to Politico on Friday.

Despite Biden’s money woes, the former vice president is also facing scrutiny over his son’s shadowy ties to foreign governments, which have taken center stage in the battle to impeach President Donald Trump. The controversy started last month when Trump suggested the Ukrainian government probe Hunter Biden’s role with Burisma Holdings. The younger Biden joined the Ukrainian oil and gas giant in 2014 around the same time his father was appointed to oversee Obama administration policy in the region.

As Peter Schweizer, senior contributor at Breitbart News, detailed in his book Secret Empires: How the American Political Class Hides Corruption and Enriches Family and Friends, Hunter Biden secured the position, which paid as much as $83,000 per month despite having no background in the energy industry or Ukraine. Hunter Biden’s lack of experience, coupled with his father’s influence over Ukraine, immediately raised questions from ethics watchdogs in both the U.S. and Europe about a conflict of interest.

Furthering the ethical cloud over the appointment is that it came during the same month that Mykola Zlochevsky, Burisma’s founder, had his assets seized in the United Kingdom for suspicion of money laundering. Some have speculated Hunter Biden’s ascension to Burisma’s board was an attempt by Zlochevsky to curry favor with western leaders to prevent further scrutiny of his business dealings.

A brazen attempt would not be totally ill-suited for Zlochevsky. The Burisma founder is rumored to be one of eastern Europe’s top oligarchs, a position obtained while serving in the Ukrainian government under former President Viktor Yanukovych — a staunch ally of Russian President Vladimir Putin. It was during his tenure in government as Ukraine’s minister of natural resources that Burisma received its oil and gas licenses.

It is in the context of Burisma and Zlochevsky’s legal troubles that Joe Biden’s political influence has raised the most red flags. The former vice president has particularly drawn questions over his conduct in demanding the Ukrainian government fire its top prosecutor, Viktor Shokin, in 2016. Biden, who has publicly bragged about the firing, reportedly threatened to withhold more than one billion dollars in U.S. aid if the Ukrainian government did not remove Shokin. He has claimed the demand came from then-President Barack Obama, who had allegedly lost faith in the prosecutor’s ability to tackle corruption.

Unofficially, though, it was known that Shokin was investigating both Burisma and Zlochevsky for public corruption. It is uncertain if the probe extended to Hunter Biden, although Shokin has recently admitted that prior to his ouster he was warned to back off the matter. Regardless of what occurred, Shokin’s successor dropped the investigation into Burisma and Zlochevsky, allowing the oligarch to return to the country after having fled in 2014.

Biden, for his part, has refused to discuss the matter, even lashing out at the media for asking if his son’s work with Burisma posed a conflict of interest during his tenure in the vice presidency. The tactic, however, does not seem to be doing Biden or his campaign any favors. A new poll released on Friday indicates that 57 percent of Americans support the Department of Justice opening an investigation into Hunter Biden’s work abroad.

Some of the donors gathered in Philadelphia this weekend, though, saw the issues surrounding Hunter Biden and Ukraine in a different light. Sheila Nix, who once served as chief of staff to Dr. Jill Biden, told the Times the former vice president’s struggles were the result of him having to run two campaigns at once.

“He’s running a primary campaign and a general at the same time and I think he’s doing a great job,” Nix said. “It’s a little unprecedented having to do both at the same time.” 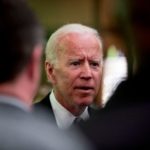 Our Take: Joe Biden is Done