When it comes to exposing just how morally rotten and utterly corrupt Democrats can be, the Biden family is the gift that just keeps on giving. The former Vice President and his son Hunter are on incredibly track to put Hillary Clinton to shame in their race to the bottom.

First it was the obvious act of nepotism that secured Hunter an unbelievably lucrative position on the board of directors of the Ukrainian gas company Burisma. Then we learnt Hunter was having an affair with the widow of his late brother Beau. And let’s not forget his checkered past with drugs that ultimately got him kicked out of the Navy.

Now, just when you thought it couldn’t get any more absurd: reports abound that Hunter had another affair with another woman while he was with his brother’s widow, and is the biological father of that woman’s child.

As always, the most absurd aspect is not even any of these wrongdoings by Hunter; but rather, his father’s indifference towards them all, and his faux anger towards those who simply ask reasonable questions about his son’s newsworthy behavior. When reporters like Fox News’ Peter Doocy actually do their job and ask tough questions of a political figure, Biden’s response is always to dismiss the questions and mock the person asking the questions.

This proves one more thing that most of us already know about the Biden family, and many other political families like them: They excel in corruption and morally bankrupt behavior specifically because those in positions of power, systematically shield their fellow Democrats. And that is why America elected Donald Trump, a total political outsider, to drain the Swamp. 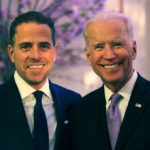 Our Take: Joe and Hunter Biden: Corrupt to the Core