There is no shortage of despicable characters who have emerged out of the Obama Administration and have come to represent the corruption, arrogance, and lust for power that fuels the Deep State. From former CIA Director John Brennan to former Director of National Intelligence James Clapper, these corrupt unelected coconspirators of our biggest ever scandal are symbolic of everything that is wrong with Washington, D.C.

But of these men, perhaps none better personifies the very essence of the Deep State than former FBI Director James Comey. Whether it was his refusal to charge Hillary Clinton with any crimes for her blatant security violations with her private unsecured email server, his sinister leaks to the media to start a Special Counsel investigation of President Trump, or his FBI’s deliberate perversion of the FISA application process, few did more to directly undermine candidate Trump, and then the Trump Administration, than Comey.

Comey has subsequently engineered a media blitz to continue waging his crusade against President Trump, denying and covering up the truth the wrongdoing on his watch and the mere existence of the Deep State. His entire approach betrays not only bottomless arrogance about, but just how far he and all his ObamaGate accomplices are removed from the American people.

Career bureaucrats like Comey feel that they have no obligation to the will of the People, and that is in fact why they still fail to understand President Trump’s success. It is also why they are being blindsided by the growing support for our non-politician President. What they fear the most is his being re-elected so that he can finally drain the whole stinking swamp that is Washington DC. 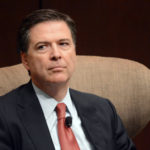 Our Take: James Comey Personifies the Deep Corruption of the Deep State