President Trump has proven many things as President of the United States, and few areas of his success are clearer than his numerous victories in foreign policy. From his negotiations with North Korea, to his successful ceasefire in Syria, he brought successes in areas where no President had before.

The destruction of the physical caliphate of ISIS represents perhaps one of President Trump’s most definitive accomplishments, not only as a measure of ensuring peace and rooting out terrorism wherever it lives, but in completely turning around America’s fortunes after ISIS, not too long ago, seemed unbeatable.

First, Obama dismissed ISIS as a “JV team” that was negligible. Then, after getting that catastrophically wrong, when it was at the peak of its power and territorial expansion, he declared it would be a “generational problem” that would never go away. President Trump refused to accept that, and as our new Commander-in-Chief annihilated the physical caliphate, then green-lit the covert operation that finally killed its leader, Abu Bakr al-Baghdadi on Saturday.

Under President Trump’s leadership, America has proven not only that it is back to its former glory, but that there is truly no task too monumental for the United States armed services to accomplish, despite years of setbacks and pessimism from the political elite.

America First not only means putting American needs above all else, but proving that America is truly the greatest and most powerful nation on earth. That is exactly why we need President Trump’s leadership, and should be grateful for it every single day. 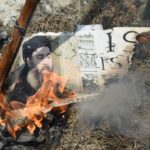 Our Take: ISIS – From Obama’s JV Team, to Caliphate, to a Leaderless Shell