At a certain point, a joke that goes on for too long stops being funny and just becomes a sad pathetic display. Never has that been more true than for the presidential campaign of “Quid Pro Joe” Biden.

The man who started off as the Democratic frontrunner has not been able to stop repeatedly shoving his own foot into his mouth, and the gaff list has become too long to even bother describing in full. From talking about letting young children touch his “hairy legs,” to his fantastical story of a poolside gangster named “Corn Pop,” Biden’s tirades and gaffes have only further embarrassed the former vice president and former frontrunner of the Democratic Party.

But this week might have been one of the clearest examples of Biden’s delirium taking on a whole new level of miasmic befuddlement. First, at a campaign event in South Carolina, Biden announced that he was a candidate for “the United States Senate,” and encouraged those who might not vote for him to check out “the other Biden”…without specifying who exactly this other Biden was.

Then, on the debate stage late last night, Biden made the ridiculous claim that “150 million Americans” have been killed by gun violence since 2007. That would mean literally half of the United States population wiped out in just 13 years, according to Uncle Joe. That’s about as realistic as AOC’s the Green New Deal.

It’s clear that there is something very, very wrong with Joe Biden. The last thing this man should be doing is running for president, when clearly the best thing for him and his family is to just drop out and be done with it. But remember, the real reason Biden should never have been allowed to run at all, is not his possible detention, but the level of corrupt activities he and his family have been involved in during his four decade-plus political career. From shady deals for his son and brother, to his connections to the Communist Chinese state, this man should never hold public office again. 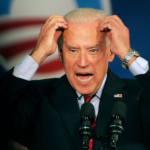 Our Take: Is Joe Biden Losing his Mind?