There is no better textbook example of poking a sleeping bear than the ongoing actions of the rogue Iranian regime. It should come as no surprise that a theocratic dictatorship, hell-bent on destroying Israel and destabilizing the Middle East, is prone to repeated hostile actions. But the mullahs have ramped up their rhetoric and actions in recent months, even making direct threats against the world’s only superpower, the United States.

After President Trump cut off the flow of free money to Iran courtesy of Obama’s disastrous Iran Nuclear Deal (which Iran had already been violating), Iran’s leaders began their escalation. In blatant defiance of economic sanctions, Iran has continued exporting its top natural resource, oil, in continued desperate efforts to fund their quest for a nuclear weapon.

It’s only natural, then, to surmise which country is the top suspect in the recent attacks on two Japanese oil tankers in the Gulf of Oman. If Secretary Pompeo’s assertion proves correct, then Tehran just might have reached the point of no return in escalating tensions. And they will only have themselves to blame.

The Daily Mail: US official ‘says it’s “highly likely” Iran was behind ‘torpedo’ attack in the Gulf of Oman’, as tanker industry chief warns ‘oil supply to entire Western world could be at risk’ if the straits are deemed unsafe

• Two tankers, the MT Front Altair and Kokuka Courageous, were hit by explosions in the Gulf of Oman today
• The Norwegian-owned Altair was hit by a suspected torpedo attack, suffered three explosions and caught fire
• Forty-four sailors on the Altair and the Japanese-owned vessel Kokuka Courageous were brought to safety
• Britain has urged ‘extreme caution’ amid spiralling tensions in the Middle East after similar attacks last month
• Iran said it was ‘suspicious’ about the attack during Japanese PM Shinzo Abe’s visit to Tehran to calm tensions
• Washington has pointed the finger at Iran, saying it was ‘highly likely’ that Tehran was behind today’s attacks
• Japanese leader Mr Abe had yesterday warned of an ‘accidental’ war breaking out between Iran and America

Iran is ‘highly likely’ to have caused the explosions which hit two tankers in the Gulf of Oman today, the U.S. is said to believe – amid fears that repeated attacks on ships could put the West’s oil supply under threat.

A fireball erupted on the Norwegian-owned MT Front Altair after a suspected torpedo attack caused three explosions, forcing the crew to abandon ship.

Sailors on the Japanese-owned Kokuka Courageous also had to flee after it was hit by another explosion, in a pair of apparent attacks today which have left the Middle East on high alert.

Britain has urged ‘extreme caution’ amid spiralling tensions in the region, weeks after Saudi tankers were attacked in a mysterious act of sabotage off the UAE coast which Washington believes was the work of Iran.

Warning that the Gulf’s waters are ‘becoming unsafe’, tanker industry chief Paolo d’Amico said that ‘the oil supply to the entire Western world could be at risk’ – as 30 per cent of the world’s crude oil passes through the area.

Tehran has said it is ‘suspicious’ about the timing of the explosions during a visit by Japan’s leader Shinzo Abe but Washington has again pointed the finger at Iran.

He also disputed Iran’s claims to have rescued the 44 sailors – saying some had been picked by an American destroyer.

Iran said it was suspicious because the attacks came as Japanese leader Shinzo Abe met the Islamic Republic’s supreme leader today in an effort to defuse the crisis.

Tokyo also revealed that the two tankers had been carrying ‘Japan-related cargo’.

Mr Abe had warned yesterday that the tense Middle East standoff, which has seen furious exchanges between America and Iran, could lead to an ‘accidental’ war. But his talks with Iran’s supreme leader did not appear fruitful today as the Ayatollah said Tehran would ‘never repeat’ negotiations with the U.S.

Meanwhile Russia said it was too early to say who was behind the explosions.

As the political reprisals began, dramatic pictures emerged of the fireball which erupted on the MT Front Altair on Thursday morning.

The Taiwanese oil refiner which chartered the Marshall Islands-flagged Altair said the ship was ‘suspected of being hit by a torpedo’.

The Marshall Islands are an ‘associated state’ of the U.S.

Reports said said the Front Altair, travelling from Qatar to Taiwan, had suffered three explosions and caught fire after a ‘surface attack’.

Iranian news agency IRNA claimed that the ship had sunk, but its Norwegian owner Frontline insisted it was still afloat.

Its crew of 23 were picked up by nearby vessel Hyundai Dubai.

The crew was made up of 11 Russians, one Georgian and 11 Filipinos, International Tanker Management said.

The Altair had been loaded at a port in the Gulf with a petroleum product known as naphtha, and was on its way to the Far East.

The Altair’s cargo was worth more than $30million, according to estimates from trade sources.

Meanwhile, a shipping broker said the Kokuka, which flies under Panama’s flag, had suffered an explosion after an ‘outside attack’ which may have involved a magnetic mine.

The company operating the ship, which was heading to Singapore, said the attack had caused ‘damage to the ship’s hull starboard side.’

The Kokuka’s 21 crew were picked up by the nearby Vessel Coastal Ace, leaving the tanker adrift and empty after an engine room fire.

One of the crew members was slightly injured in the incident and received first aid on board the Coastal Ace, while the Kokuka’s methanol cargo is said to be intact.

Iran said its search and rescue teams had picked up the 44 sailors from the two ships and taken them to the port of Jask, although the U.S. disputes this.

Meanwhile Norway has advised its ships to ‘stay well clear of Iranian waters until further notice’.

Commander Joshua Frey, a spokesman for the U.S. Navy’s Bahrain-based 5th Fleet, said his command was ‘aware’ of a reported incident in the area.

The fleet received one distress call at 6.12am local time and another one at 7am and the guided-missile destroyer USS Bainbridge offered assistance.

The UK Government later said: ‘We are deeply concerned by reports of explosions and fires on vessels in the Strait of Hormuz. We are in contact with local authorities and partners in the region.’

The co-ordinates offered for the incident by the UK group put it some 25 miles off the Iranian coastline.

Japanese trade minister Hiroshige Seko said there had been ‘Japan-related’ cargo on board the vessels. Japan, a U.S. ally, is was big importer of Iranian oil until Washington ratcheted up sanctions.

Meanwhile Russian deputy foreign minister Sergei Ryabkov cautioned against blaming Iran. ‘Lately we have been seeing a strengthening campaign of political, psychological and military pressure on Iran. We wouldn’t want the events that have just happened, which are tragic and shook the world oil market, to be used speculatively to further aggravate the situation in an anti-Iranian sense,’ he said.

Speaking to the security council today he demanded that ‘facts must be established’ and said: ‘I strongly condemn any attack against civilian vessels’.

Benchmark Brent crude oil spiked four per cent in trading following the reported attack to more than 62 dollars a barrel, according to early market figures.

High tensions in the Middle East, and belligerent rhetoric from Washington and Tehran, have sparked fears that any sudden movement could escalate into a war.

Last month the U.S. deployed B-52 bombers and the aircraft carrier USS Abraham Lincoln to shore up its military presence in the region.

The apparent attack today will send tensions spiralling further as Japan’s prime minister visits Iran in a bid to calm the situation.

On Wednesday, after talks with Iranian President Hassan Rouhani, Shinzo Abe warned that any ‘accidental conflict’ that could be sparked amid the heightened US-Iran tensions must be avoided.

But his talks with Iran faced a setback today as the country’s supreme leader, Ayatollah Ali Khamenei, said Tehran would ‘in no way repeat’ negotiations with the U.S.

The Ayatollah said today that U.S. ‘couldn’t do anything’ to stop his country developing nuclear weapons.

He also took aim at Donald Trump and said he did not believe the U.S. President’s offer of ‘honest negotiations’.

Saudi and UAE officials were tight-lipped about the extent of the damage but pictures showed at least one tanker with a hole in its hull.

The mysterious sabotage sent tensions soaring in the Middle East as the U.S. blamed Iran and its allies for the attack – which divers said appeared to be the work of magnetic explosives.

Matters worsened after two pumping stations on a major Saudi oil pipeline were attacked by explosive-laden drones, halting the flow of crude along it.

The incidents sparked fears of a Gulf war breaking out ‘by accident’ with the U.S. and Iranian militaries on high alert amid high tensions between Washington and Tehran.

The Saudi-led coalition which is fighting the Houthis in Yemen immediately pointed the blame at Iran, saying Tehran had equipped the rebel group with ‘advanced weapons’.

Saudi officials said the attack ‘proves this terrorist militia’s acquisition of new special weapons’ [and] the continuation of the Iranian regime’s support and practice of cross-border terrorism.’

A rebel TV network acknowledged the attack and said Houthi forces had fired a cruise missile.

The latest crisis erupted after Iranian leader Hassan Rouhani threatened to abandon the 2015 nuclear deal with the West, which is faltering already after Donald Trump pulled out of it last year.

Tehran has demanded that the UK, France, Germany, China and Russia help Iran to dodge U. S. sanctions, which were restored last year when Donald Trump quit the pact.

Speaking last month Rouhani said Iran would ramp up nuclear enrichment if such help did not materialise.

The threat also sparked a backlash from Israel, where Benjamin Netanyahu warned he would ‘not allow Iran to obtain nuclear weapons’.
Donald Trump’s White House has not ruled out military action against Iran, although both sides insist they do not want a war.

Iranian supreme leader Ayatollah Ali Khamenei has said there ‘won’t be any war’ while U.S. Secretary of State Mike Pompeo said the U.S. ‘fundamentally does not seek any war’.

The 2015 deal, which then-President Barack Obama helped to negotiate, saw sanctions on Iran lifted in exchange for limits on its nuclear programme.

After the US withdrew from the accord it restored crippling sanctions on Iran, exacerbating a severe economic crisis.

European powers have tried to find ways to blunt the impact of new U.S. sanctions, in the hope of persuading Tehran to continue to abide by the deal.

However, their efforts have largely failed, with all major European companies abandoning plans to do business with Iran for fear of U.S. punishment.

Rouhani slammed European countries for seeing the US as the world’s ‘sheriff’ and said this keeps them from making ‘firm decisions for their own national interests.’

Washington has effectively ordered countries around the world to stop buying any Iranian oil or face sanctions of their own. 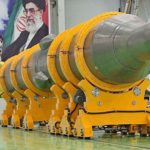 Our Take: Iran is Playing with Fire