One of the most absurd stances taken by the President’s opponents in the new year is that he was unjustified in his airstrike against Iranian general Qassem Soleimani. Some have even gone so far as to claim that Iran is completely guiltless and is a victim of “oppression” by the United States.

This is a lie. Iran is an Islamic theocracy, one that has eliminated women’s rights and which executes gay people as a matter of course. They have regularly destabilized other nations in the region in their quest for dominance, including their illegal pursuit of nuclear weapons despite international sanctions.

In recent years, Iran has proven itself to be the world’s leading state sponsor of terrorism, with Soleimani himself responsible for hundreds of attacks that have caused the deaths of over 600 American soldiers. Iran has repeatedly and deliberately tried to provoke the United States, from shooting down our drones to kidnapping our sailors.

And yet, to some, America simply responding appropriately makes Iran the victim. This is all the proof you need that Trump Derangement Syndrome is real and that those who hate the President will even go so far as to defend a murderous terrorist regime and an indictment mass murderer just to virtue-signal against our own President, just because his name is Donald J. Trump. 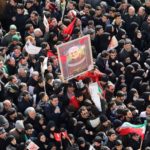 Our Take: Iran is Not a Victim