The ongoing battle for our culture is not only a national one, but a global one. Last night, we received a very clear and encouraging reminder of the progress that has been made in the fight to save the West.

If Brexit was a precursor to the election of Donald Trump, then yesterday’s general election in the United Kingdom could very well be a precursor to our own 2020 election.

The choice was clear: Boris Johnson’s Conservative Party, determined to deliver Brexit and secure the United Kingdom’s sovereignty, or Jeremy Corbyn’s hate-filled Labour Party, bent on turning the once-great democracy into a socialist country. And the people spoke.

Not only did the Tories produce their greatest victory since Margaret Thatcher was Prime Minister, but Labour had their worst performance since the 1930s. Even with the media on their side, including the BBC, the fear-mongering Labour Party still could not convince the British people to vote against their own interests and overturn the results of the 2016 referendum. Essentially, last night was the re-affirmation of Brexit.

This development should give us renewed hope for our own fight right here in America. Even with the full force of the Left working day and night to stop the MAGA agenda, President Trump still has the will of the people on his side, just as Prime Minister Johnson had the people on his side yesterday. Three years later, the global movement for national sovereignty is stronger than ever. 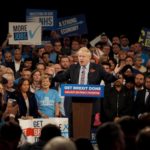 Our Take: In the UK, the Will of the People Wins. Again.