There are only 24 hours left before this impeachment debacle finally comes to an end, with the Senate vote to acquit President Trump all but guaranteed.

While this is undoubtedly a victory, it must be said that much ground was given up in this battle. Quite simply, impeachment never should have been allowed to get this far in the first place. From the bogus charges to the rushed inquiry that ignored due process, the charges should have been dismissed outright by the Senate, rather than giving the Democrats an opportunity to grandstand once more.

But one way or another, impeachment will end very soon. The most we can do now is work fast to make up for all of the wasted time. We owe that much to President Trump and the MAGA agenda. 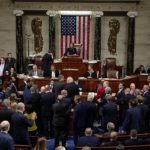 Our Take: Impeachment Never Should Have Gone This Far