There are few things more satisfying than seeing a wrongdoer face the repercussions of their own harmful actions, and this is exactly what will happen in the case of the Democrats’ ongoing impeachment facade.

Although plenty of Democrats – especially those in the districts won by President Trump in 2016 – have a lot to lose in this fight, few have more on the line than Speaker Nancy Pelosi. At the start, Pelosi seemed reluctant to let impeachment go forward for these very same political reasons, even as her lackeys Adam Schiff and Jerry Nadler insisted on moving forward.

But once AOC’s “Squad”, The Four Horsewomen of the Democrat Apocalypse, came into the picture with their endless incessant demands for impeachment, it was only a matter of time before Pelosi caved, and unwisely cave she did.

Now, as Nadler prepares his own hearings following Schiff’s, it has become apparent that there is no way out for Pelosi and the Democrats at this point. Either they charge full steam ahead and potentially lose those 31 seats in the House next year after impeachment fails in the Senate, or Pelosi backtracks to save the so-called “moderates” in her party to the ire of the far-left, which could result in her ouster as Speaker.

Either outcome would be a disaster for the Democrats, and thus very good for the rest of America. 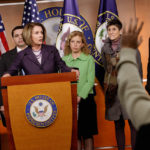 Our Take: Impeachment is About to End Pelosi’s Career