Today is already set to be an historic day with the United Kingdom’s official exit from the European Union. God willing, it can prove to be a historic day and cause for celebration here in the United States as well.

Today is the day that the United States Senate will vote on whether or not to call additional witnesses and hear further testimony in the impeachment trial of President Trump.

It is clear that such a move would be a waste of everyone’s time and taxpayer dollars, since no new witnesses or testimony could possibly prove any kind of impeachable offense on the President’s part. The Democrats’ only rationale for pushing this measure is too lengthen the whole despicable impeachment hearing and further their attempt to nullify the 2016 election and steal the 2020 election.

This can all be ended with a swift acquittal of President Trump today, provided one thing occurs: The Senate GOP unites in defense of truth and justice. Hopefully, even the most unreliable of Senate Republicans will acknowledge the manner in which this debacle has threatened our very Constitution itself, and it would be a truly momentous occurrence if the Republicans in the Senate could unite on at least one thing, certainly something that may be the most important vote of their entire careers. Today will be one of the great tests of whether the GOP has a spine and respects the will of the American people. 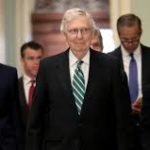 Our Take: Impeachment Could End Today if the GOP Hold the Line