When it comes to remembering 9/11, few aspects are more important than to remember the culprits behind that horrific attack.

Radical Islamic terrorism has been, and remains, the single greatest existential threat to our world today. But what must be noted is that there are two ways for the evil ideology of radical Islam to invade our society: The first is through outright terrorist attacks, like September the 11th, the November 2015 Paris attacks, the July 7th London bombings, and other atrocities that have led to the deaths of thousands of Americans and Europeans around the world.

Aside from their more overt methods, however, there is another, even more sinister method for working their ideology into our society: Through political correctness, the “diversity” agenda, and mass migration.

Perhaps nowhere is this represented better than in Congresswoman Ilhan Omar. She, like many other Democrats, actively pushes for increased and unfettered immigration into the United States, silences all who oppose this with political correctness, and hides behind her “diversity” card whenever she is criticized for her own radical beliefs. There is no doubt that Omar is apathetic towards the suffering of American citizens on 9/11, as her now-infamous “some people did something” speech essentially claimed that the real tragedy was the alleged violation of the civil rights of Muslim-Americans following 9/11.

For her to be so nonchalant about the brutal reality of that day, and instead to side with the ideology of the perpetrators, reveals her attitude to the threats we face. And keep in mind: This woman is a member of the United States Congress. It only took 18 years for an elected member of the federal government to start downplaying the actions of the 9/11 hijackers, a level of subversion that in the long-run could be more harmful to our Republic than any physical attack.

Rep. Ilhan Omar’s (D-MN) March 23 dismissal of the Islamic terrorist attacks of September 11, 2001 — describing the murder of thousands of Americans as “some people did something” — is “disgusting,” said Johnny Spann, father of Mike Spann, a former CIA officer and the first American killed in the war in Afghanistan.

Spann joined Wednesday’s edition of SiriusXM’s Breitbart News Daily with host Alex Marlow on the 18th anniversary of the 9/11 attacks.

Marlow asked if Americans are remembering and learning the lessons of 9/11.

“I think, maybe, the majority of people have made good on that,” replied Spann, “but I’m really fearsome that a lot of folks are forgetting [and] becoming complacent, again. You can just look around and see the people that we’ve elected to put into Congress and the Senate, and we’re beginning to get people with … that far-left mentality, and people that are not as vigilant to keep America strong and free. It worries me.”

Spann continued, “If you told me 20 years ago when this happened that we’d ever be in the position we’re in right now, I would’ve said, ‘No, we won’t be, because we’re all of one accord, right now,’ but, hopefully we’re going to be able to regain consciousness of what happened and [make sure] it can’t happen again.”

Marlow asked if Spann had heard of Omar’s description of the 9/11 attacks as “some people did something” while speaking at a Council of American-Islamic Relations (CAIR) fundraising event in Los Angeles, California.

“I did, and I think it’s disgusting,” responded Spann. “I just don’t understand how — well, I guess I do understand when I really think about it — because there are places in the United States where people have congregated, and they’re getting together and becoming communities, and they’re of one accord, and we’re going to be attacked from within instead of people having to go over to Afghanistan to join al-Qaeda and ISIS and some of those terrorist organizations.”

Spann warned, “They’re going to be able to do it right here in the United States if we don’t stop it. We’ve got to become vigilant, right now, and we’ve got to understand what’s going on. People have got to go out and vote. It’s disgusting for me to hear those things.”

Maintaining vigilance against threats to America is “the way to honor the people that have given their lives,” determined Spann.

Mike Spann’s words to his children before deployment to Afghanistan focused on the need to defend American freedom against America’s enemies.

“[It reminds me of] what Mike told his children the day before he left to go to Afghanistan,” Spann remarked. “When he set them down and was telling them that he was going to be leaving — Alison was nine, Emily was four, and Jake was six months old — and they really couldn’t understand. Alison couldn’t understand, because she was crying, and begging her dad not to go, because she had seen the stuff on TV. She had seen what had happened. She asked what would happen now, and he explained it to her.”

Spann recalled, “He told her, ‘People like me have to do things that I have to do, so that we can keep this from happening, so that you can continue to have your freedom, so you can go to school, go to church, play on the playground, do all the things you do as a free person.’”

“It’s very important that we understand we have got to keep that mentality,” Spann added. “We have got to be willing to fight for our freedom. Freedom did not come free. People gave their lives for it, and it’s so important for our young people to understand.”

“Right after 9/11, I saw a big surge in people wanting to be patriotic,” stated Spann, highlighting the legacy of his son’s service in inspiring others to serve. “I remember when Mike died, and I came back to Winfield after burying him — his burial up in Arlington — and I had emails and I had letters — boxes of letters — and young men that today still contact and keep me informed as to where they are and what they’re doing.”

Shortly after the 9/11 attacks, Spann asked his son about the terrorists.

“I said, ‘Mike, who did this?’ His first response to me was, ‘Dad, you know who did this. Osama bin Laden did this. We’ve been tracking him. He’s been telling us he’s going to do this for years.’”

The 9/11 attacks were a function of government incompetence and negligence, determined Spann.

Spann said, “The thing that comes to my mind today — one of the things I dwell on so much is knowing that we had somebody out there like Osama bin Laden and his al-Qaeda organization — [is that] they were telling us what they were going to do. They were killing Americans around the world.”

“They first attacked us in 1993, on their first try to blow up the World Trade Center,” said Spann, further highlighting the 2000 attack on the USS Cole in Yemen’s Aden harbor. “Then he declared war on us publicly. I remember seeing it on TV.”

“We did nothing,” said Spann of the federal government’s response to Osama bin Laden. “We were asleep at the wheel. … It wasn’t all Americans, because people like Mike and other people in places that he was at, they knew it. Osama bin Laden’s name was a common name when we had dinners … when he would come home.”

Spann added, “If people like Mike knew it, then we know everybody else knew it. We had an administration that sat with their hands folded, with their head in the sand, and worried about everything else except the most important thing, which was to keep Americans safe and free.”

“We let Osama bin Laden have his will and kill Americans,” concluded Spann. “That really irks me today, when I think about it. I just cannot understand how we have Republicans and Democrats let this happen.” 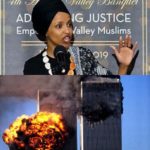 Our Take: Ilhan Omar and Remembering 9/11