As the 2020 primary season continues, the curtain is being pulled back further and further on the Democratic Party’s platform…or lack thereof.

With their policy positions including open borders, free healthcare and college for illegals, socialized medicine, taking away virtually all gun rights, and total censorship on social media via language policing, it’s no wonder that the opposition party is trying to turn the narrative away from their policies and instead towards simply attacking President Trump and his supporters.

While attacking Trump does shift the focus away from their embrace of Socialism, this strategy is no more based on fact than the notion that any of their far-left policies can actually succeed. Hoping to derail the President’s re-election, they first threw all their weight behind the ludicrous “Russia” conspiracy. When that finally died after nearly two years, they pivoted right around to an equally absurd lie: The claim that President Trump and his supporters are white supremacists.

Make no mistake, these attacks are not only about trying to tear down our duly-elected President; they are also about undermining and discrediting you, the American voter. Whether they are accusing President Trump’s supporters of being Russian bots or neo-Nazis, their goal is to dehumanize Trump voters and make it seem as if they do not matter. This is all because they fear the power of the MAGA vote, and they cannot fathom the possibility of the same historic vote in 2016 happening again in 2020.

In many ways, MSNBC has long been the Trump Derangement Syndrome channel — sure, CNN is in close competition, but MSNBC usually takes the cake. NewsBusters analyzed MSNBC coverage for the month of July and found seven instances where hosts on the channel explicitly compared President Donald Trump to Nazi dictator Adolf Hitler.

Donny Deutsch, host of the MSNBC talk show Saturday Nights With Donny Deutsch, emerged as the worst offender, but Morning Joe co-host Joe Scarborough also employed argumentum ad hitlerum against the president multiple times last month. This kind of rhetoric is ridiculous, not just because Trump has a Jewish daughter and son-in-law or because he is a good friend to Israel, but also because he has explicitly condemned racism time and time again.

Deutsch recently caused a stir by blaming Trump voters for the white nationalist marches in Charlottesville, Va., in 2017. On Friday’s Morning Joe, he claimed that every Trump voter “owns” the entire Trump presidency, and that swing voters have to be “shamed” into understanding that they “own the racism.”

“I think that’s the message that’s got to get out there: ‘You own it. You own the blood that happens. You own Charlottesville. You can’t do it. You get the whole package,” he said last week.

Trump shot back, attacking Deutsch’s new TV show. “So funny to watch Little Donny Deutsch on TV with his own failing show. When I did The Apprentice, Donny would call me (along with [Erin Burnett] & others) and BEG to be on that VERY successful show. He had the TV “bug” & I would let him come on though he (& Erin) had very little TV talent,” the president tweeted.

“We are heading to such a dangerous place. And guess what? You look at history, it can happen here. Maybe it’s the Jews next. Oh, oh, oh: I forgot, his daughter is married to a Jew. Who says? Who says? You know, I come from a place, I come from a group of people where it happened to, six million of them,” Deutsch said on MSNBC’s Deadline: White House.

On his show Morning Joe, Scarborough played a clip of Trump saying, “Omar has a history of launching vicious, anti-Semitic screeds,” and his crowd chanting, “send her back!”

“That’s the president, actually, from his Nuremberg rally from last night,” Scarborough narrated.

“I want people to go back and look at Nazi Germany in the early ‘30s because the parallels are stunning… Oh, it can’t happen here, it can’t happen here,” Deutsch said on Morning Joe. “It can happen here… If you’re the person who votes for Donald Trump, you are no different than if you were watching on a subway five white nationalists berate an African-American woman saying, ‘Go back to where you came from,’ and then you hid and you put your head down.”

Of Trump, he added, “This is a man with Nazi tendencies.”

The Washington Post‘s Eugene Robinson responded, “Well, the time to start sounding an alarm, a general alarm, was some time ago. And people should be screaming now. The alarm should be at full volume. You know, one thing you – most columnists wisely resolve, is don’t bring out the Hitler/Germany analogy, you know? That’s – you never use that. We’re getting close.”

“Donald Trump talking about what a disgrace to our system… I have to think back to that Financial Times article yesterday talking about how the Nazis in the early 1930s would rail against quote, ‘the system,’ constantly railing quote ‘against the system’ because the, quote ‘system’ was actually still stopping them in the early 1930s from doing what they wanted to do. So they attacked, quote ‘the system’ just generally until finally they were able to break it down and do whatever they wanted,” Scarborough said on Morning Joe.

“There’s so many stunning parallels to what Hitler was doing in the early ’30s. Once again, I’m not saying Trump is going to slaughter six million Jews, but ranging from the fake news parallels to the seizing of new powers, the Reichstag [fire] of ’33 versus Trump’s nonexistent national emergencies and declarations to ignore Congress, the racial scapegoating, the rallies, the isolating of himself, the creating of false ‘other.’ He has the Justice Department in his pocket. He has one branch of the government marching blindly behind him,” Deutsch said on Saturday Night Politics.

On Saturday Night Politics, MSNBC host Joy Reid called Trump an “autocrat,” suggesting, “In his mind, he wants to be president for life.”

“I want to start using the words fascist,” Deutsch retorted. Reid agreed that Trump is a fascist. Then Deutsch added, “And tendencies, many tendencies like Adolf Hitler. I said it. Throw me off the air.”

Reid did not throw him off the air. Instead, she compared Trump’s actions to apartheid in South Africa. “At minimum what Donald Trump has done, at the most generous, he’s taken the Republican Party of the United States and turned them into the National Party of South Africa from 1948 until 1990. Because that party was a purely Christian fascist. They called themselves Christian nationalists,” she replied.

NewsBusters’ Geoffrey Dickens identified no fewer than 13 instances where MSNBC hosts attacked Trump for horrific racism on the level of Adolf Hitler, if not explicitly comparing Trump to Hitler. Watch the videos, and see the other six examples, here. 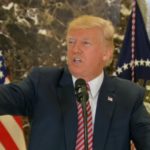 Our Take: How You Know the Democrats are Afraid